That feesh gots no spots.
"... don’t let your life become the sloppy leftovers of your work" Jim Harrison

"In truth you can throw dries and swing flies and still be a loser. That would be an elite loser though.
Rare breed." - MTgrayling

MM. Posting our favorite flat for all to see? Come on, man! That aside, do you sell those glasses at the angler? 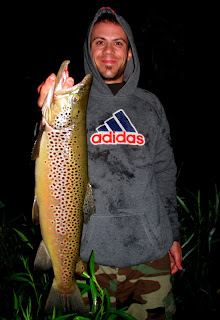 he was born 27 years ago

his mom was a hard partier

Joe was the product of a one night stand

his mom did lots of drugs and drank hard

Joe has never met his dad.

He was passed around from relative to the next until he was 11 years old.

I met Joe at the dam in Gays Mills when he was 11.

He was a skinny short kid that loved attention.

The first time I met him he was at the dam in Gays Mills fishing smallies.

I caught a nice one and he helped me land it.

I was going to release it and he asked for it.

I fished along side of him quite a few times through the years.

I had an influence on him.

His uncles and grandfather taught him the ways of the outdoors.

He went to school Police Science and graduated first in his class.

I gave him pointers on interviews and let him use my name as a reference.

He was ignored and not picked as a police officer because of his size.

He went down the wrong path a couple times...

He was sidetracked for almost 2 years.

He has regained his confidence and learned some serious life lessons.

He again is my "Best Friend" other than my wife.

Wisconsin Gun Dogger wrote: He again is my "Best Friend" and also my wife.


fixed.
It was supposed to be devils handing Kim Jong Il a giant black cock - RFA

Hah hah hah! I love the photo title... "proud daddy has his priorities out of whack". No shit! When a cuda lacerates me I like to just let the wound go unattended. They've such clean mouths, infection never seems an issue.
"We old farts meet on Tuesdays for bacchi ball and whores. Bring a shotgun."- G.P.

There will be a bunch of good used ones for sale[…]