This douchenozzle's strategy of framing this as an elitist-vs.-hardworking folks is nothing new. When some big floods came through the Catskills in 2006 our local idiots blamed TU and the fishermen because they hadn't been allowed to bulldoze and straighten the stream channels.

"Thank you for your email and your concern for the natural resources of our Great State of Michigan. I assure you that both as a company and as a family, we are committed to respecting and conserving the resource that is the AuSable River.

There are a number of points that I would like to clarify for you:

1. The Grayling Fish Hatchery, which we now operate under a lease from Crawford County, has been in existence since 1914 and has discharged this same 8.64 million gallons of trout farm water into the AuSable for over a century. Under the management of the Michigan DNR, the facility was much larger, and the effluent water was completely unregulated.

2. The Michigan Department of Environmental Quality evaluated our discharge permit application for a year and solicited public comments and held a hearing. The result of this process was that MDEQ issued us a strict discharge permit that limits the content of our discharge to levels that the department believes are protective of the many uses of the River and its ecology.

As I am sure you are aware, there are some folks who do not agree with the DEQ and the permit that they have issued. They also take issue with our operation of a commercial fish farm on this site, choosing to ignore the century that this farm has already operated under other management. These folks have used clever rhetoric to make it sound as if our operation is in some way a "new threat" to the AuSable, and have gone to great lengths to attempt to assassinate the character of our company and our family.

We believe that our plans for the continued operation of the Grayling Fish Hatchery are sound and are guided by proper conservation principles. It is my hope that you will evaluate our operation based on the facts of what we are actually doing, rather than the rhetoric of persons who seemingly oppose the legal use of water for anything that doesn't directly benefit them.

Our farms produce food for people to eat. We believe that this is a very high priority use for water, and that our farms produce food responsibly and sustainably. Over 90% of the seafood consumed in the United States is imported from other countries, much of it from Southeast Asia. Sourcing locally produced food is a huge focus of the environmental movement in the United States for many sound environmental reasons. You cannot have locally produced seafood without locally based production. We are a small farm business, family owned, operating at two locations in Michigan, marketing our products primarily to Michigan restaurants and grocery stores. We provide fresh, healthy and sustainable seafood for hard-working Michigan families, and we believe that this is something to be proud of.

dan@harriettahills.com"
This is Almighty - standing by, over.

By Woolybug25 -  Fri Jan 08, 2016 6:45 pm
-  Fri Jan 08, 2016 6:45 pm #613967
Thanks for sending that, Peebs. I'm glad he responded. Unfortunately, I think the person using "rhetoric", is Vogler himself. He is correct that the property is a landmark. It's been there forever and most fishermen in the area wouldn't want to see it go away. The issue isn't the farm itself, it's that he's turning a "tourist destination" into a commercial outfit. This isn't a farm currently scaled to his size. It's really just a low scale hatchery with limited effect on the ecosystem. This is what he is proposing:


He wants to expand the Grayling hatchery to produce 300,000 pounds of trout a year. That’s more than 15 times the amount produced now. If it comes to fruition, it would be, by far, the largest commercial fish farm in the state.

He wants to use the MEAP verification as evidence of why it's safe. But as he admits, the limits are entirely voluntary and there is zero punishment for violating it. Which his volume suggests will happen almost immediately. Does this sound like a guy that will shut it down if phosphorus levels get too high?


“Monitoring is very expensive. It’s a lot of lab work and I pay the bill. So as you add more monitoring to my operation, you’re impeding my ability to make a living here,” Vogler said, “The reality is that I’m not a non-profit organization. So if I’m going to be here and run this thing and give the community the benefit of the summer tourist aspect, I have to be profitable. So adding more monitoring burdens without being able to demonstrate how that helps – I’ve got a little problem with that.”

The reality is that he is trying to spin a tourist attraction into a commercial farm for his personal gain, with promises he has no intention or liability to perform upon. Here's the true concern he's trying to spin himself out of:


We’re not opposed to the hatchery in principal because it’s really a landmark in Grayling,” Tom Baird of the Anglers of the Au Sable said. “We just want to make sure it’s done right so as not to create a threat to the Au Sable river.”

Michigan’s Department of Environmental Quality has drafted a permit that’ll allow Vogler’s operation. If approved, the farm could discharge up to 8.64 million gallons of water into the Au Sable River each day.

The DEQ admits the water quality would decrease, but the draft permit says the decrease is necessary to support “important social and economic development in the area.”

He can get fucked as far as I'm concerned...
"All mountain hippies are as young as they day they were born, smarter than Einstein, better looking than Tom Selleck and could outfish an army of pinners." - foureyedgeek

thriesta wrote: in regards to

By stillsteamin -  Mon Jan 11, 2016 7:46 am
-  Mon Jan 11, 2016 7:46 am #614047
His response pretty much confirms every assumption I made about the guy. I don't care what bullshit permit he has in his hand, the Ausable River is no place for any sort of aquaculture, and hopefully the courts come through on the side of the people.
They all wanna be Hank Williams
They don't wanna have to die

I've been fishing the Au Sable since I was 9 years old (now 31). You know how a lot of old timers lament about how the fishing "used to be?" It's not that way on the Au Sable--at least it hasn't been during my lifetime. The fishing seems to keep getting better, and it's because of all the work that Anglers does. Your dues and donations will not only help fight this fish farm, but will also help Anglers fight the next threat, and the next threat, and the next threat. At the same time Anglers will be working towards improving the fishery through habitat projects, research, and improved regulations. You can see some of what they've done so far here.

WillyF wrote:I urge anyone who has ever fished or plans to fish the Au Sable to join Anglers of the Au Sable. It's $25/year, and they'll get you your money's worth.

I've been fishing the Au Sable since I was 9 years old (now 31). You know how a lot of old timers lament about how the fishing "used to be?" It's not that way on the Au Sable--at least it hasn't been during my lifetime. The fishing seems to keep getting better, and it's because of all the work that Anglers does. Your dues and donations will not only help fight this fish farm, but will also help Anglers fight the next threat, and the next threat, and the next threat. At the same time Anglers will be working towards improving the fishery through habitat projects, research, and improved regulations. You can see some of what they've done so far here.

Just watching the door over here...
"girls with eating disorders will usually let you come in there in butt." -Jhnnythndr
"...my grandmother’s Tang always tasted like rusty water and dirty socks." - Average Joe
"with some limited exceptions steelhead live where the lady selection is sparce." - MTG 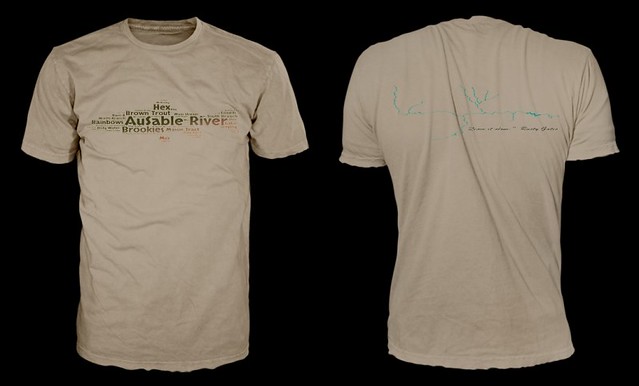 ironman wrote:
If I may make a premonition:

"And I would have gotten away with it too! If it weren't for you damn meddling kids, and your fancy $2000 fly rods." Dan Vogler

While much of the focus has been on fish poop, the issue here is a lot bigger than that. Big aquaculture wants to plug shit like this in all over the great lakes. Flow through and open net fish farming is bad for our fisheries. You can protect our streams and the Great Lakes by contacting your legislator and letting them know you support HB 5255 and oppose HB 5166, 5167, and 5168. Click the link for contact info.http://us9.campaign-archive1.com/?u=267 ... 0ea18045b8

“Because the anticipated beneficial impacts of the Hatchery outweigh its expected detrimental impacts, the project will yield important social and economic development in the area in which the waters are located, such that the lowering of water quality is necessary to support important social and economic development.” Daniel L. Pulter, Administrative Law Judge

Can't say I was surprised to hear the news, the state's director of environmental quality was a BP executive after all. Lost the battle, losing the war. Hey, at least its Friday.
They all wanna be Hank Williams
They don't wanna have to die

Reply
Return to “General Discussion”
28 May

Ill start my flies today and finish by week's end.[…]