I just finished that- great read.
It's lime the battles between sperm whales and giant squid half a mile below the surface of the ocean. Only it happens in the palm I your hand.- thndr

stillsteamin wrote: ↑Fri Apr 12, 2019 10:57 am Greatness. Thanks
Relates: The Golden Spruce is a good read, if you're into special trees.

if you're into seemingly futile quests, Shadow Divers is another fine read.

I slapped the phone twice, snoozing another nine minutes with each blow. (Who came up with a nine minute interval for the snooze alarm anyway?) Then guilt, not the additional sleep, rolled me out of bed.

Jake's a morning person, which is to say he wakes up each morning around five no matter what. I on the other hand am prone to staying up past midnight and sleeping until nine or so when I'm allowed to.

My conscience wouldn't allow me to.

I dragged myself into some clothes, shuffled off to pee and then, to the coffee pot. I microwaved a breakfast burrito, sucked down some strong black go-juice, and oriented myself to the waking world. Jake was watching game previews on ESPN for Gonzaga's upcoming game against Texas Tech. I'd pulled my Oregon map and sheaf of papers out and had them spread before me on the dining table. As the coffee began to take hold, I had started thinking about The Tree from a different perspective. I cross referenced the original article from The Drake (complete with my wintertime notes) with the road map, and it occurred to me that I'd been approaching this from the same perspective all along.

But what if I had it wrong? What if what I was sure about actually wasn't true at all? My head was starting to fire on all eight cylinders, and I checked the map again.

Jake knows me well, and I had finished my breakfast and was pouring my third cup of coffee before he engaged me in conversation.

"I think I've been locked into a way of thinking about this thing that might be completely backwards. It's clear from the article that this guy flew into Portland. I also have positively identified only one landmark from his post. But here's the thing--there are only two major highways from Portland to the coast. I'm thinking that he came in on the other one. Then, he drove a long way to find some fishable water because everything else was blown out. And there's another thing. He said they were only four or five miles from the coast, but it's pretty clear that the river with The Tree was in a heavily timbered area. Up here, it's all pastureland for several miles between the coast and the mountains. I'm thinking I need to drive quite a bit further south."

"Interesting," he said. "Mind if I tag along today? I can't think of the last time I've fished this many days in a row. I could use the rest today."

"Sure," I replied. "Give me a couple to look over a few more things and we'll get going."

I'd purchased a copy of Frank Amato's "Oregon River Maps & Fishing Guide" at the local sporting goods store earlier in the week. I double checked a couple of entries, and took a few minutes to review some of the suggestions that had been sent to me via Instant Messaging from well-meaning fellow anglers. One of them stood out as unique from most of the others. It read, in part: "... (it's) fairly close to a tree similar to the one in the photo. You need to take a narrow road uphill, downhill and through the forest to locate it. I found out about this river from a fish bio that was using it as a case study for sea run cutthroats. He knew my fishing buddy who worked at OSU."

Nearly all of the clues I'd gathered thus far had led me to beautiful dead-ends as far as The Tree was concerned. This tip, albeit from memories from a long time ago for the angler who shared it with me, was unique. To be sure, it was still fairly vague, but it was in the opposite direction of where I'd already been searching, and I had a hunch that, combined with my other new insights, that this was worth checking out.

We headed out on a long drive. Anybody who is an angler and has driven along the Oregon coast knows that there are many rivers, streams, creeks, and estuaries along the way. I found myself sizing them up as we crossed bridges on the 101--too small, too big, too pastoral, too this, too that.

When we arrived at the road that would lead to the river in question, there was no bridge at all.

"What the heck--we've got all day," I said, and I nosed the Tacoma to the east. We went up a hill. Way up a hill. So far up the hill that when we arrived at an intersection, Jake said "This can't be it--let's go back."

I replied, "No, let's take this turn. He said it was uphill and then downhill--let's head on down and see."

So, we went downhill. The timber was thick, and the fog was burning off and rays of sunlight pierced the evergreen canopy and dappled the lush undergrowth where the scattered beams made their way to the earth. We drove for miles--far more miles than the old trip report would have indicated, but it was beautiful, we had time, and The Tree had already led me to so many lovely places already--and I was simply happy.

Eventually, the road turned from it's generally easterly direction to curve around the base of the mountain. Soon, we were heading in the general direction of the coast when we encountered the river. The road merged with the general path of the stream, heading ever closer to the ocean when we encountered a T-intersection that gave us the choice: continue forward along the river, or turn right and cross a bridge.

We turned, and there it was. 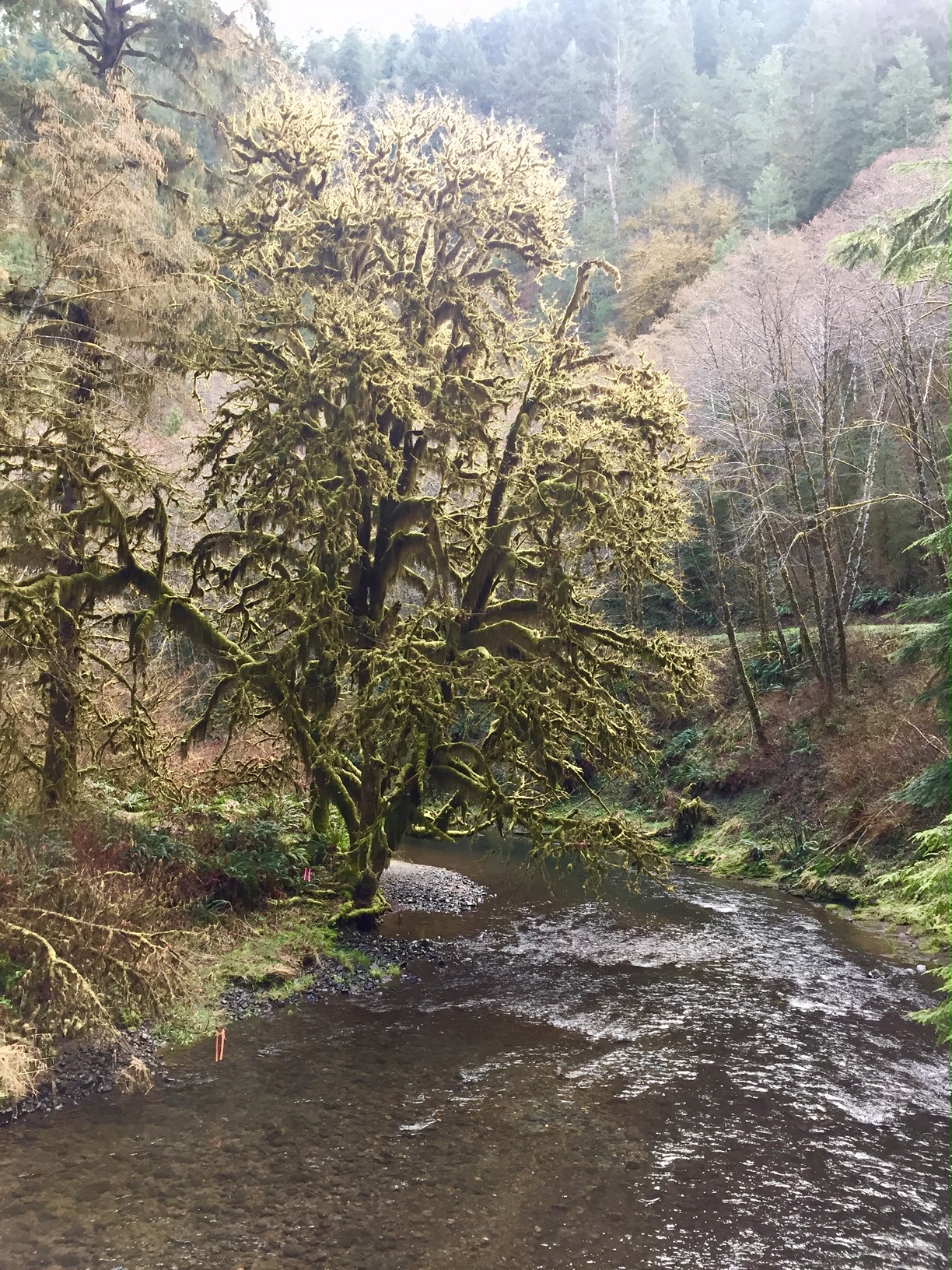 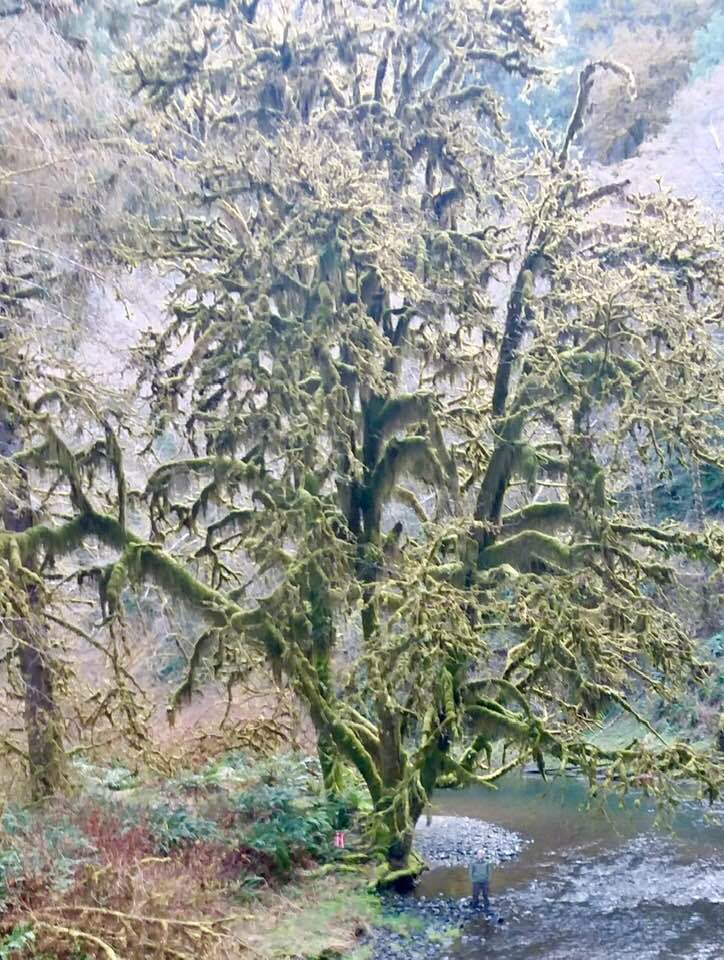 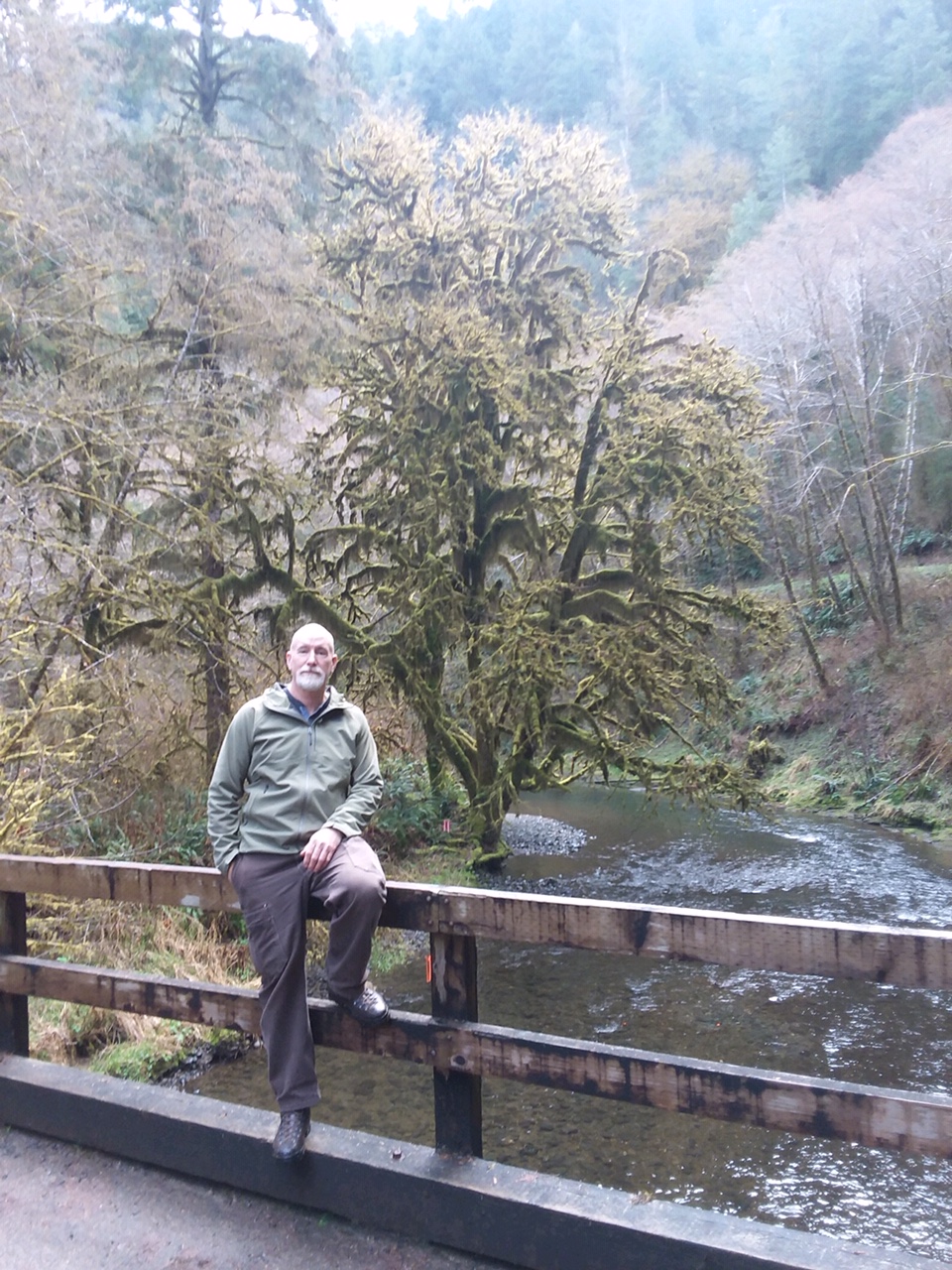 Jake celebrated with me, snapped a few photos, and marveled at the fact that we'd found it. Then he said, "I'll just hang out by the truck for a while and give you all the time and space you need." It was an incredibly kind act, but not terribly intuitive. I'd been hovering at the verge of tears from the moment it had become clear that this was indeed The Tree. Nonetheless, I was very grateful for the meaningful gesture.

I left the bridge and walked down to stand beneath this old and enormous big leaf maple. The rough bark of this species is such that it practically invites moss to take root on it's limbs. I stood beneath a huge limb that hung parallel to the ground and placed my hand on it. I gave it a gentle shove, and watched the massive limb sway under the impulse, the moss gently swinging in a slow wave beneath it. 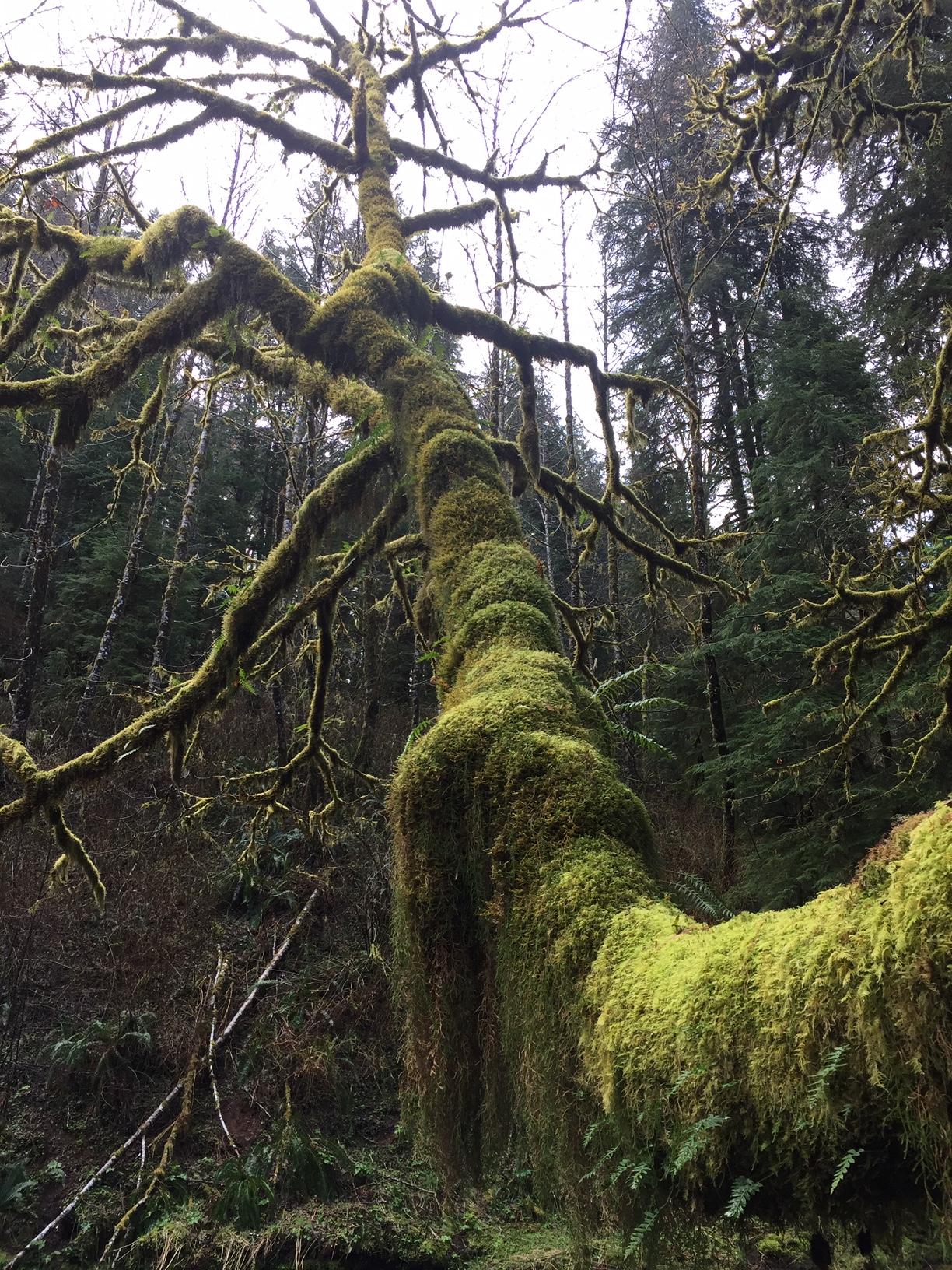 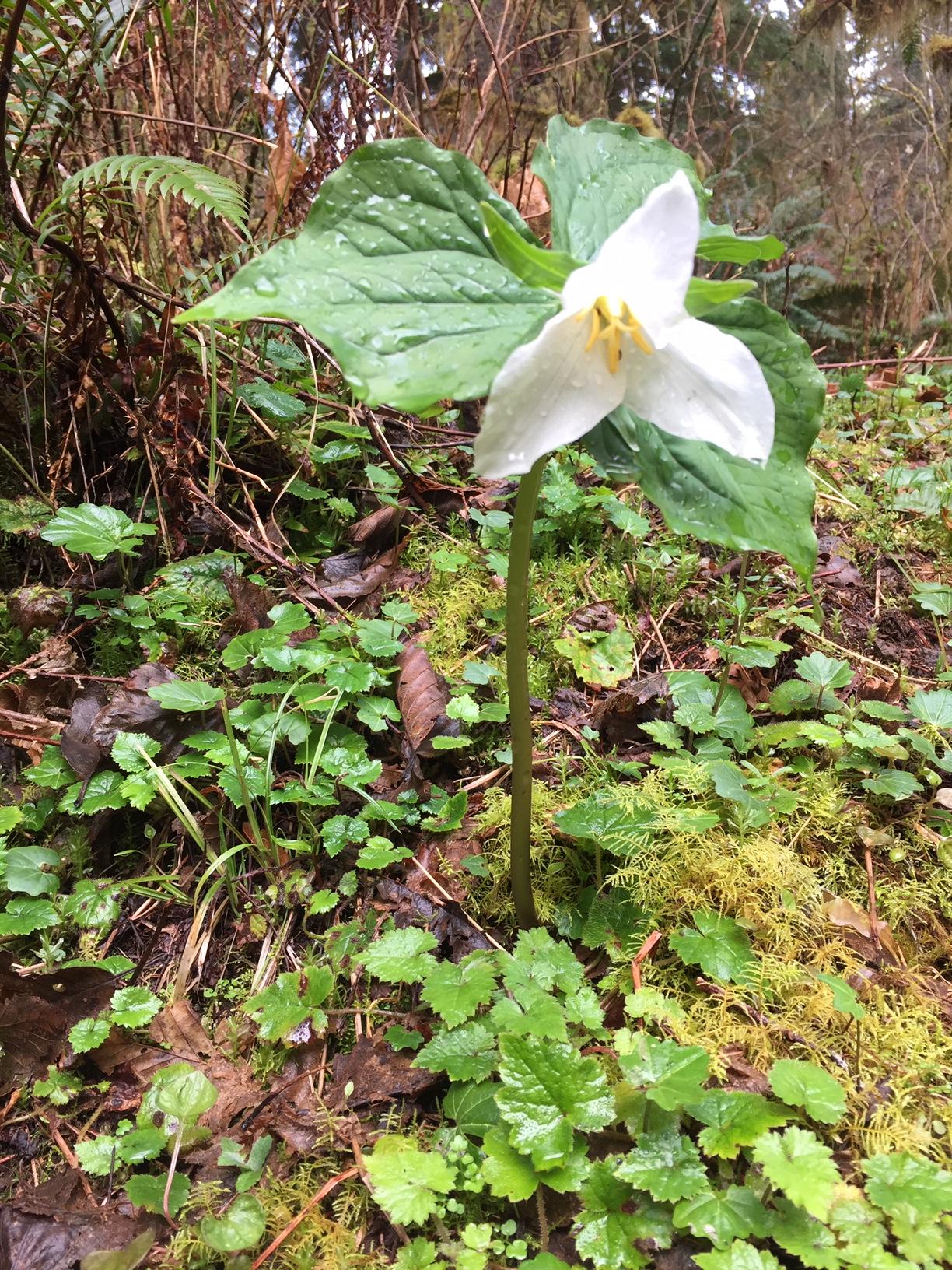 Clearly, some other soul feels as strongly about The Tree as I do. 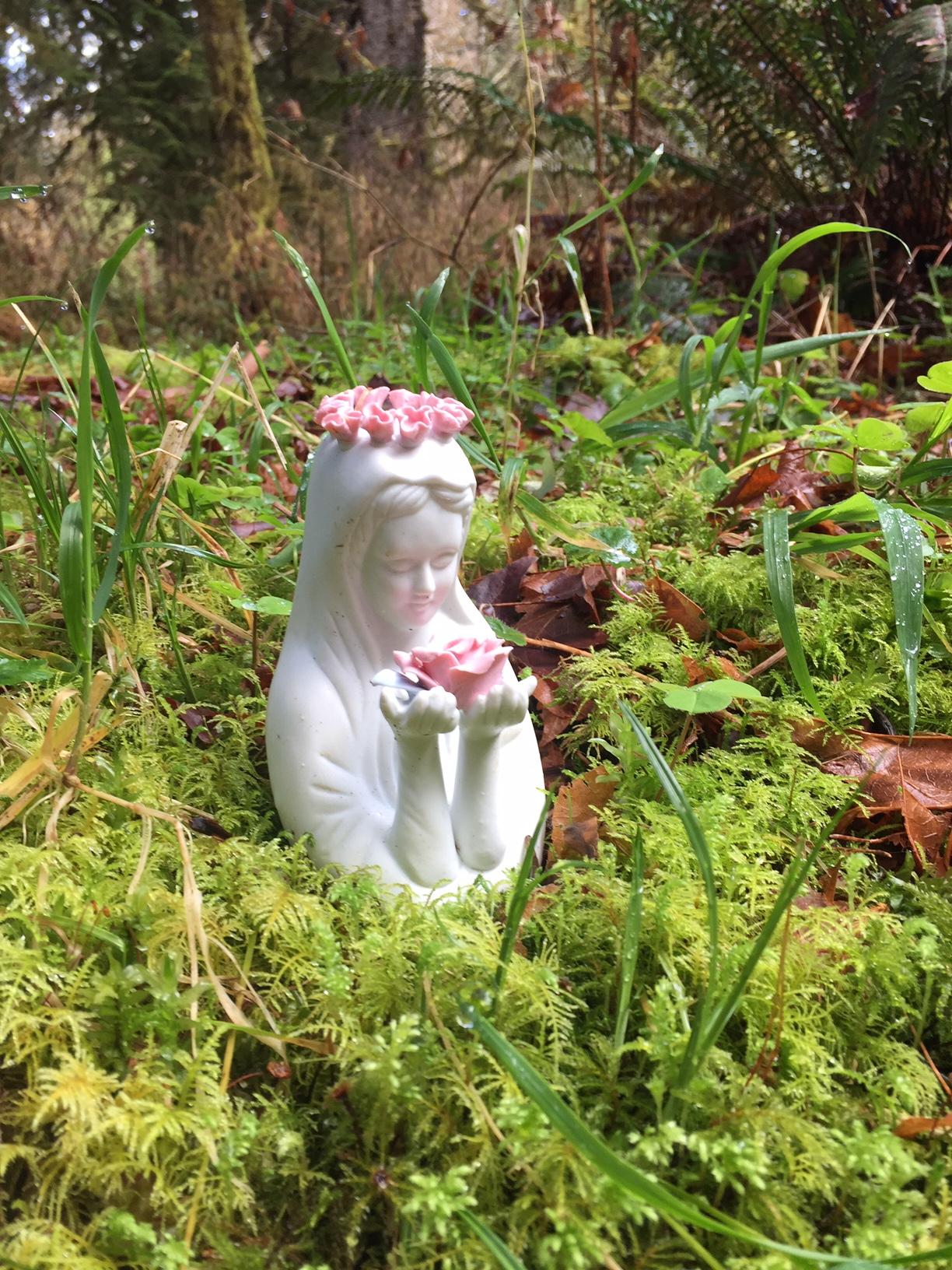 It had been my original plan to fish beneath The Tree as had doubtless many other lucky anglers, but Jake and I had left all of our gear back at the rental. Now, standing beside the stream, I could clearly see six or eight salmon redds, obvious enough to any experienced angler but doubly so as they were each marked with a fluorescent orange disk. It made me happy to think that salmon had likely been spawning under the umbrella of that majestic tree for over a century--maybe two. The water was low and clear, and I was happy to just spend some time, trying to take it all in, and to simply relish in an extended moment.

Saturday, March 12, 2011 to Friday, March 29th 2019 is two thousand, nine hundred and forty days. I had been stacking days, dreaming of the moment (should it ever arrive) of how I would feel to finally find The Tree. Some of my friends felt that it had been nothing short of rude for the original poster to not share with me the location of The Tree. In retrospect, I bear him no ill will at all. In fact, I believe that finally encountering it was made all the more sublime as a direct function of the yearning, the wondering--and the waiting.

I hope some day that you find it too.

next quest?
violence solves everything.

The second is infinitely more genuine and honest- “I was mesmerized by your quest to find The Tree. But, your quest to discover yourself in the process left me humbled and deeply honored to know you.”

The Tree is truly hallowed ground.
"We're a cross between our parents and hippies in a tent...."
180 Degrees South

This was really well written, thanks for taking the time. I just keep looking at the tree. Can’t imagine what it was like In person. Pretty sacred grounds...
Maybe we haven't drank enough Busch- Nolan

K_P wrote: ↑Fri Apr 12, 2019 11:08 pm
Some of my friends felt that it had been nothing short of rude for the original poster to not share with me the location of The Tree.

To be honest, I don't think anybody owes anyone the location of such a thing. Too much is given away these days. Instant gratification denies people the journey, as you've acknowledged. A simple "no" brought you to the coast, and it brought us all this story. Thank you, and I suppose, PS as well.
They all wanna be Hank Williams
They don't wanna have to die

it took you that long to come up with this? ni[…]