By Heero[CntRmbrPwd] -  Sun Aug 04, 2019 4:29 pm
-  Sun Aug 04, 2019 4:29 pm #694895
I went out brightly-colored minnow fishing yesterday. It’s my second time after the minnows this year. First time was the easiest lake around to catch them, where I have caught them before, but it had already warmed enough they weren’t cruising or rising so I plowed the depths briefly then took a nap.

This time I went to the second easiest lake to catch them. It’s only a 4.5 mile walk with about 4K elevation gain so it’s an easy day trip. I dragged a non-fishing friend co-worker who just wanted to get out of the house with me. I’m not sure he would agree it’s an easy walk, but he didn’t slow me down too much and we kept it under 25 min/mile pace.

We started down at the big lake then went up and up and up a little more.

A couple of the colorful minnows.

I should’ve been out scouting sheep, but my free time is abundant in the coming weeks so I’ll get on it before season opens.

However, I still approve of the minnows. They put the icing on the proverbial cake that is hiking in beautiful country like that.
... there are two kind of anglers, sight fishermen and the rest of you. If you don't see it first, it doesn't count. - Long Haired Dave

So, I'm posting this picture for three reasons:

1) To test if (or not) Google Photos is a platform for posting to forums. (It is.)

2) As a show of solidarity to another born-again Montanan.

3) To be a ball-busting knot head.

You're living the dream, Mr. Heero. 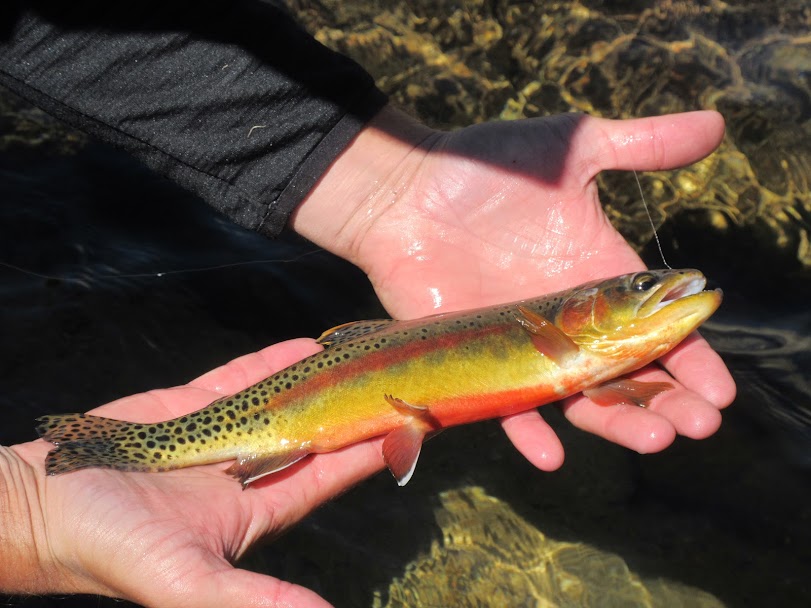 I have a garage.

I know where the morels are and find them in the spring. Morels are the only mushroom I am comfortable identifying.

Today I walked to another pond. It is a fair bit further, but not as steep. Chubs grow large in this one — I caught a couple around 18” and one over 20”. I caught small chubs, too, and some small sail-finned guppys (of the Arctic variety). I missed one more decent guppy, maybe next time I’ll catch the big one so I can steal its soul by making a pitcher.

My plan today was to walk up to Lake 1, cross a saddle behind the lake, then drop into another drainage to fish a different lake, one reputed to have golden trout pushing 20”. I was able to convince two non(ish)-fishing friends two suckers to join me.

It ended up being about that, but with a lot of roundabout trying a pair of saddles - after a ton of talus and bouldering because, you know, no trail - then finally finding a way down that didn’t necessarily need climbing gear to descend (and ascend later). It probably did, but there were no fatalities so not definitely. We were the only people there, something rare for even the more remote lakes in the Absaroka-Beartooths.

I didn’t catch any fish. I didn’t see any fish, either, with only 2 rises seen, an hour apart, from a large, probably the same, fish. No cruisers, no dinks rising, no nothing. Tried all the usuals that typically catch me fish in the mountain lakes and some unusuals (for me such as watching a bobber with nymphs) and naught doing.

Good adventure, tho. I will go back to the lake next summer, but I will not take the route I did today. Instead, I go via a different drainage, which will be 12+ each way, and then camp for a weekend. Today ended with about 15 miles walked with 5700 elevation gain total. Like I said, easy day hike.

Good times. This was lake 11 for the summer and possibly the last. Hunting season starts soon.