Back in September, I exchanged some texts with LTFI asking about his dog, and he ended up inviting me to join him on his annual Thanksgiving fishing trip.

I didn’t hear anything after that, so I checked in with him the first week of November. He said the trip was still on, and six were expected to attend. I volunteered to cook dinner and asked him if he had any requests.

He responded with, “A nice piping hot pizza.”

A few days before the trip, I kneaded up some pizza dough and did a bit of preliminary cooking, and then gathered up some gear.

It was a nice drive with little traffic until I left the highway and started down the road that led to the lake.

“Travel At Your Own Risk”

I soon discovered these weren’t suggestions.

2.jpg (152.73 KiB) Viewed 1433 times
I found the campsite without incident and went to work setting up the kitchen.

3.JPG (115.5 KiB) Viewed 1433 times
LTFI and his buddy Nick came walking through the trees around noon or so. They’d arrived well before me and had spent the morning picking up a few fish not far from camp.

I threw back a couple of beers while they set up their tents, and once that was done we jumped into Nick’s truck and drove to a spot that LTFI had found productive in the past.

The rest of the crew showed up soon after we got back to camp.

After pouring myself a cocktail I got to work and heated up a pot of meatball soup. That was followed by deep fried zucchini appetizers and six pizzas, all with the same toppings: red sauce, mozzarella, sausage, pepperoni, bell peppers, mushrooms, and black olives. I’d brought a one star Caesar salad, but no one wanted to eat it so it stayed in the cooler.

By the time dinner was finished I was exhausted and (ever so slightly) inebriated, so under the pretext of calling my wife I ambled over to my truck, crawled into the bed, and tried to sleep. Even with three sleeping bags I found it difficult to stay warm, and the next morning when LTFI rapped his knuckles on the side of the truck, I was tempted to tell him to head out without me.

Someone had restarted the fire from the night before, and we huddled around it trying to keep warm while everyone finished up their morning coffee.

It was just starting to get light when we loaded up the trucks and headed towards another spot LTFI knew about that had been productive in the past.

It turned out to be a beautiful, windless, sunny day.

7.JPG (166.16 KiB) Viewed 1433 times
The fish here usually feed in shallow water when it’s windy and overcast, gorging on leeches and scuds. Turn over any rock and you’ll know why.

9.JPG (92.52 KiB) Viewed 1433 times
I fished for a couple of hours without any luck. During that time I could see LTFI’s buddy Nick fishing off the point to my right, and he was consistently hooking up. Since this was my first visit to this particular lake, I decided to walk over and ask him what I was doing wrong.

On the previous day, LTFI had generously given me a pack of leaders, two spools of tippet, and a box full of flies. I put on a brown leech (which happened to be what Nick was fishing), made a couple of casts into the deep water, and felt a tug. It was a nice fish, but I made the rookie mistake of reeling in too much line. The fish made a strong run as I was walking back to shore, and the nail knot connecting the leader to the fly line caught on the tip top.

LTFI made his way over, and soon he hooked up as well.

Nick moved down to where a couple of bait fishermen had camped out earlier and caught a couple there, but after that there was nothing, so we jumped back in the truck and drove to a new spot.

I’d spent the day fishing leeches and scuds, both of which call for a pretty slow retrieve. As a result I’d lost quite a few flies to the rocks. There were some minnow patterns in the fly box LTFI had given me, but I hadn’t seen a minnow all day. I pondered that for a moment and decided, “Fuck it. I’m not catching much as it is, but I’m tired of losing flies, and it’s a faster retrieve.”

I made a few more casts, and …

22.jpg (137.41 KiB) Viewed 1433 times
LTFI headed off to poach Nick’s bucket while I stayed put, and after another half hour or so of casting, I headed back to the warmth of the truck for a much needed nap.

I’ve no idea how many fish LTFI and Nick caught. It was a lot.

I was happy with my two.

When we got back to camp, the dirty dishes I’d left soaking were frozen in a block of ice. All of the rinse water was frozen as well, and it took a while to boil enough water to make things right.

Once the water was thawed, drying the dishes proved to be a challenge because they’d freeze before we had a chance to wipe them off.

Disposable paper and plastic might have been a better option.

Once the previous night’s dishes were dealt with, I heated up a pot of tortilla soup, doled it out, and passed it around.
I’d planned on making pico and guac for appetizers, but the tomatoes, avocados, and limes were frozen solid. They’d have been in better shape had I left them in the cooler.

Dinner was rice, beans, steak tacos, and a one star southwestern salad.

My nap in the warm truck had done wonders, and I managed to force down a drink or two after dinner while sitting around the fire.

A few complained that the unusually nice weather had adversely affected the fishing.

The next morning I said my goodbyes to the crew before they headed out to the lake, then spent a couple of hours packing up my dirty/frozen gear before hitting the road.

I’m grateful that LTFI decided to include me on this trip, and I had a fantastic time, but next year, I'm renting a cabin.


I vote cabin next year... though we say that every year

You went all out

I'm glad you made the trip.


I've been so plugged in to the Zoom world, this was my first chance to breathe some fresh ...cold....air. I always look forward to this one. It's usually my last trip into the county until spring.

Joe fishes the big desert lake to the east so I knew he was used to catching nothing in the cold and invited him up. He gave me a "hell yeah" and I sent him some vague info about freezing our ass off, maybe at a campsite, maybe rough camping, who knows, weather dependent blah blah blah.

He says "yeah, I've got dinner covered for 2 nights."

Nick and I got up there early, stuck a few, and met joe back at camp around noon. It was cold. 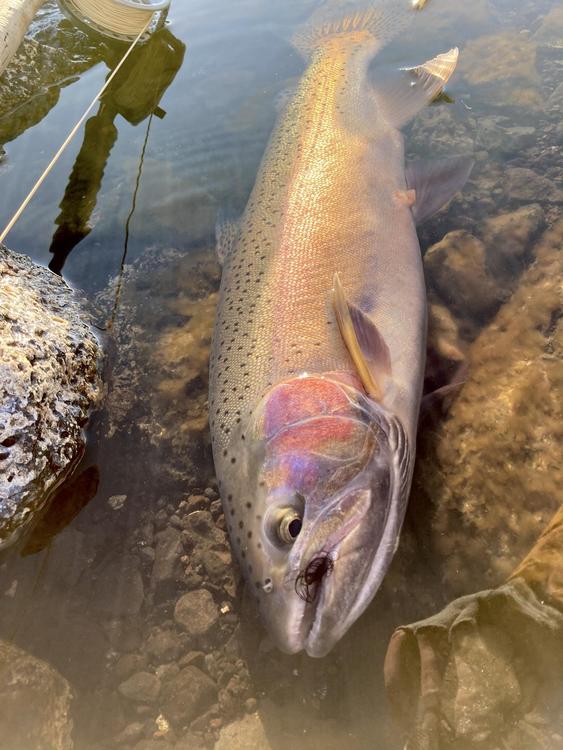 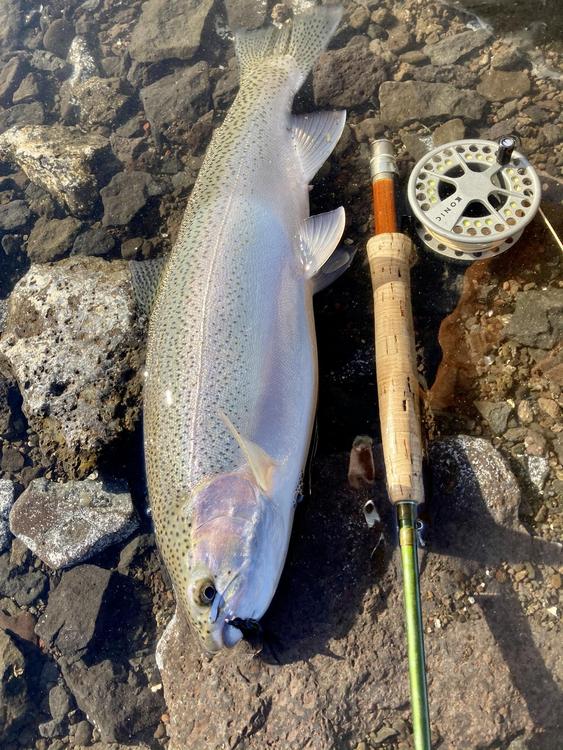 Afternoon, we poked around but it was pretty quiet. 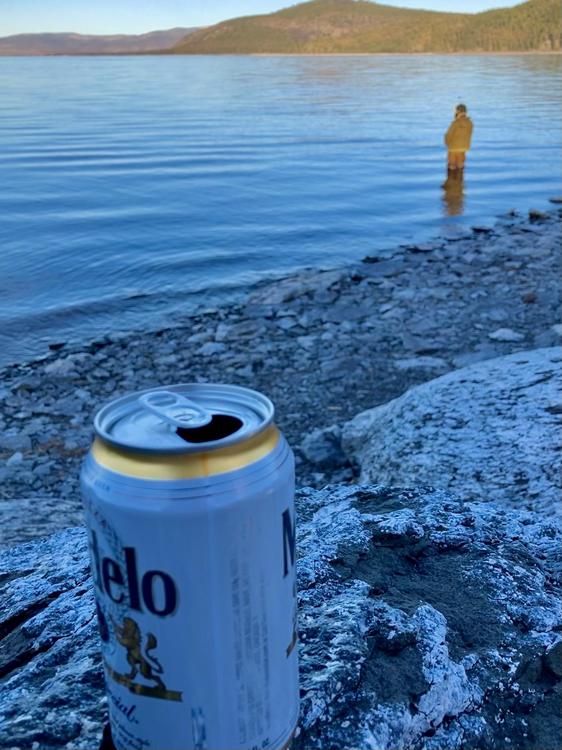 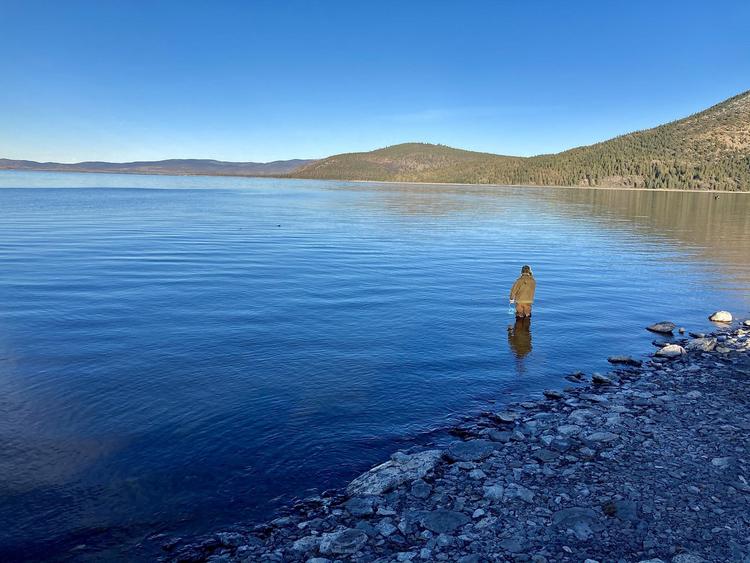 Got back to camp, got a fire going and settled into a couple cold nights ahead. 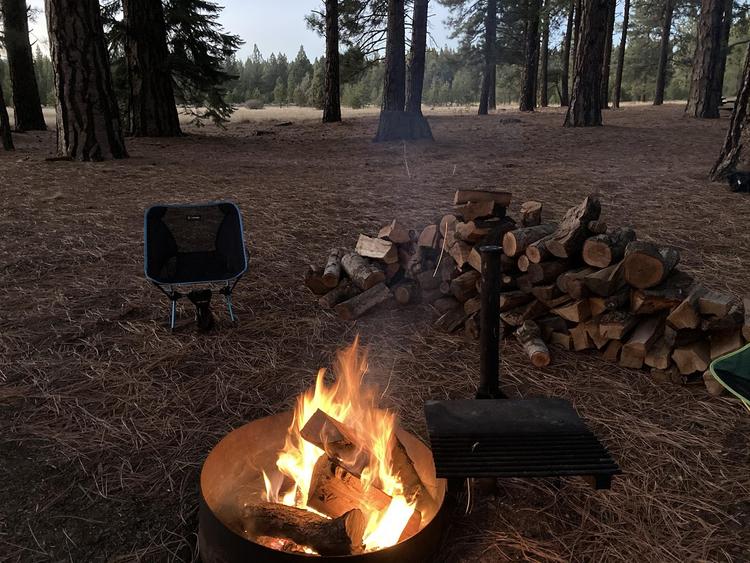 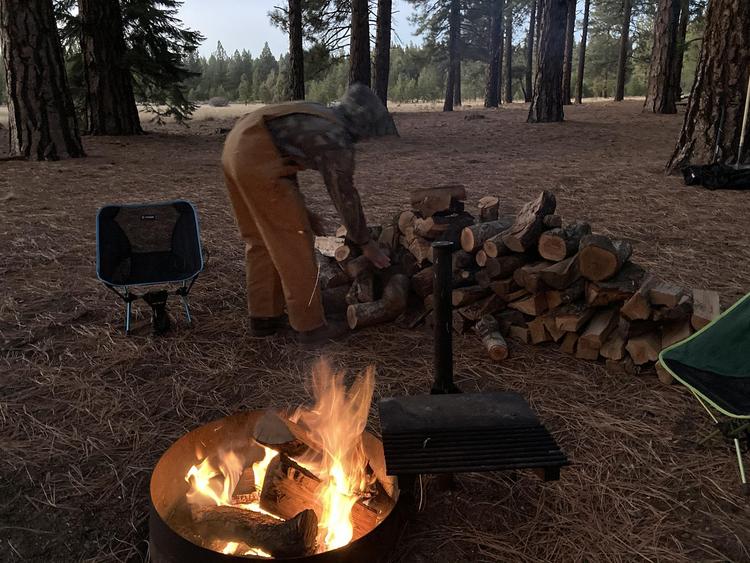 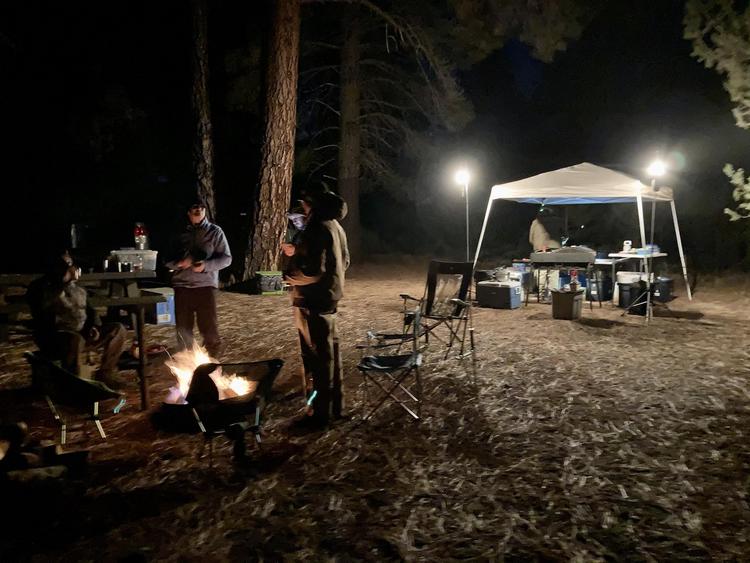 A meatball soup, fried zucchini, and oven fresh personal pizzas for the whole crew. One of the best cold weather camp meals I've ever had. 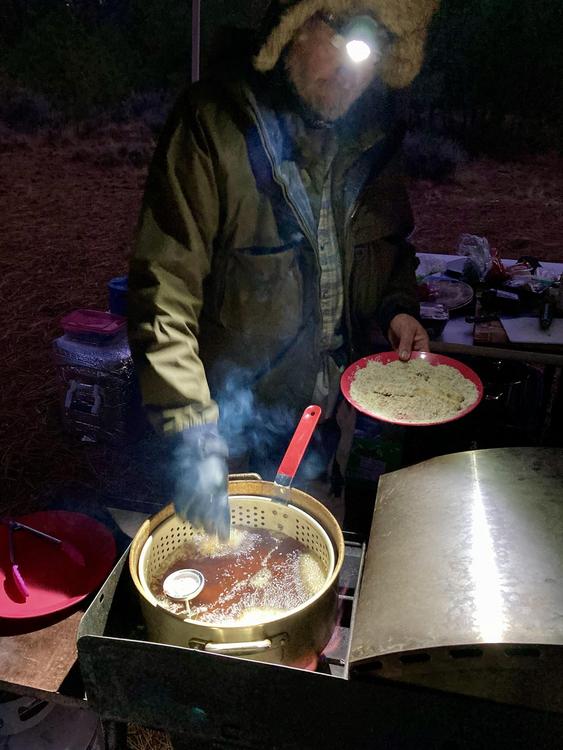 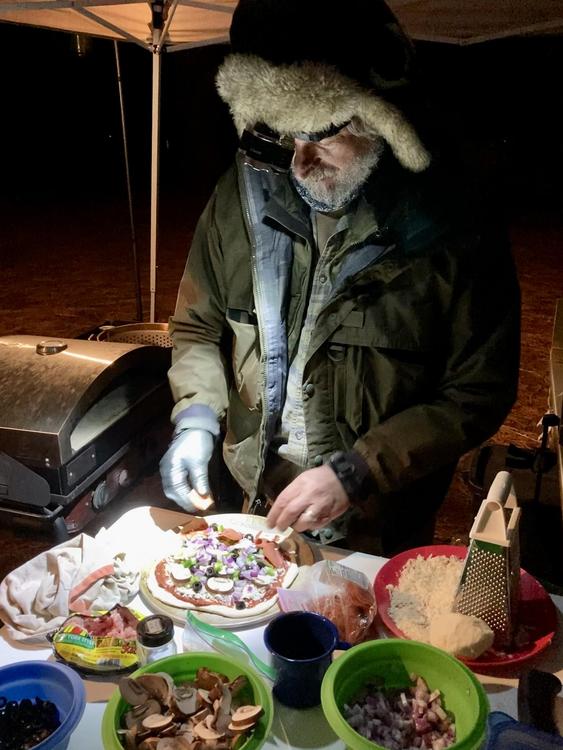 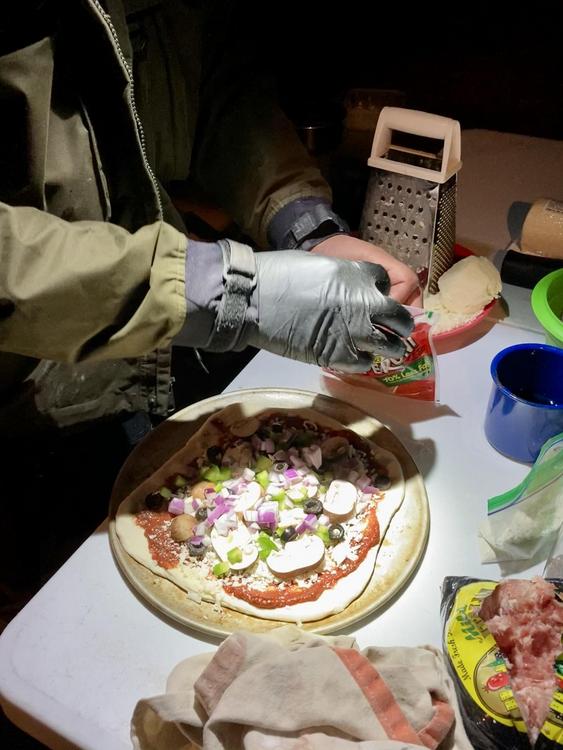 Joe wisely snuck off to bed under the guise of talking to his wife. Smart man.

The next morning we checked out another part of the lake. 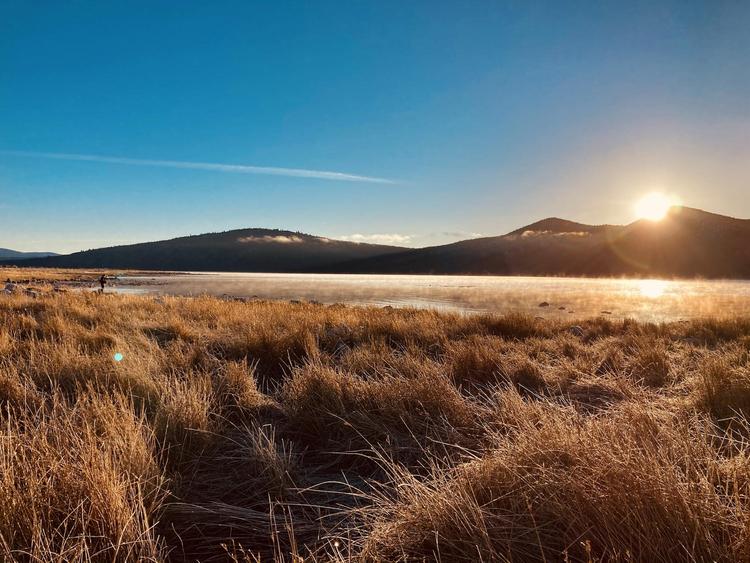 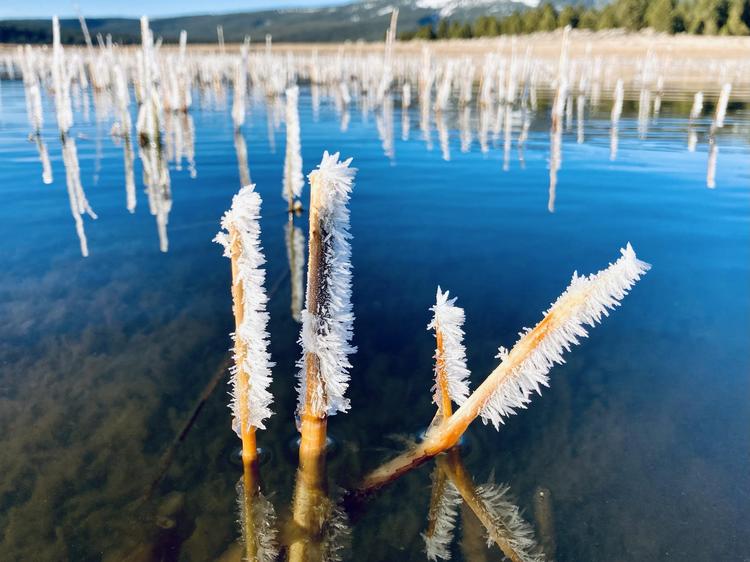 Nick was on fire. The whole trip. After a while, I just started fishing in his wake. Can't really call the guy rookie anymore. 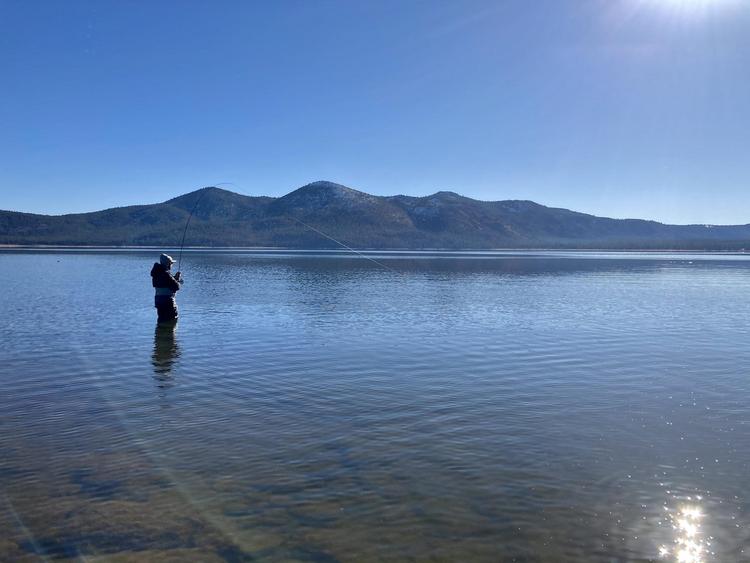 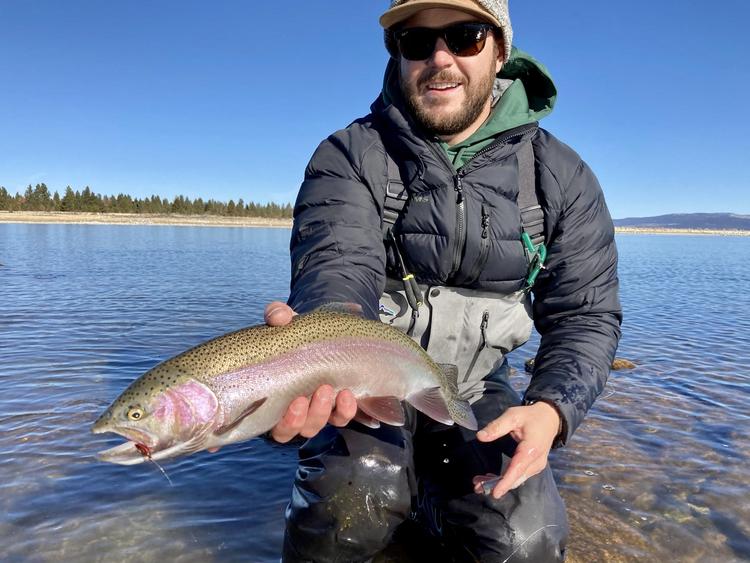 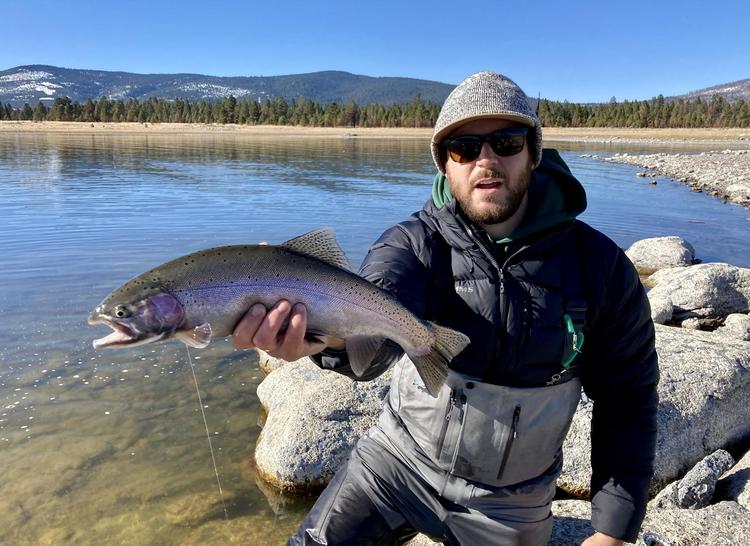 He outfished us all. 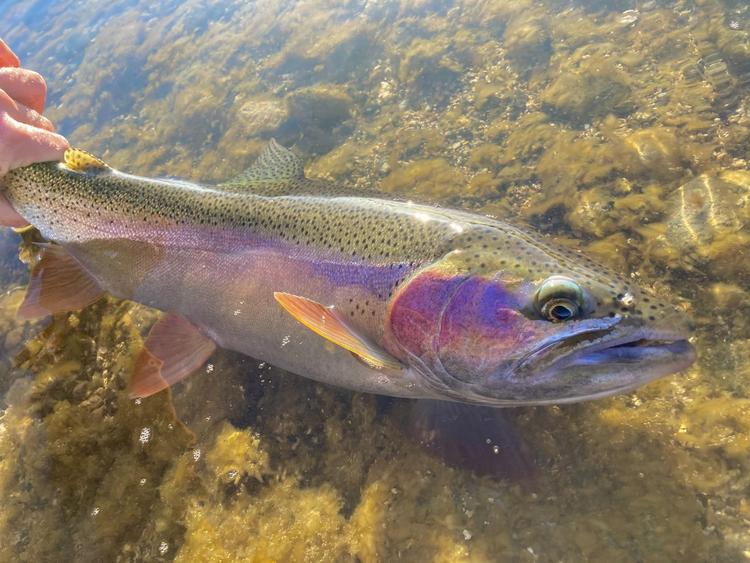 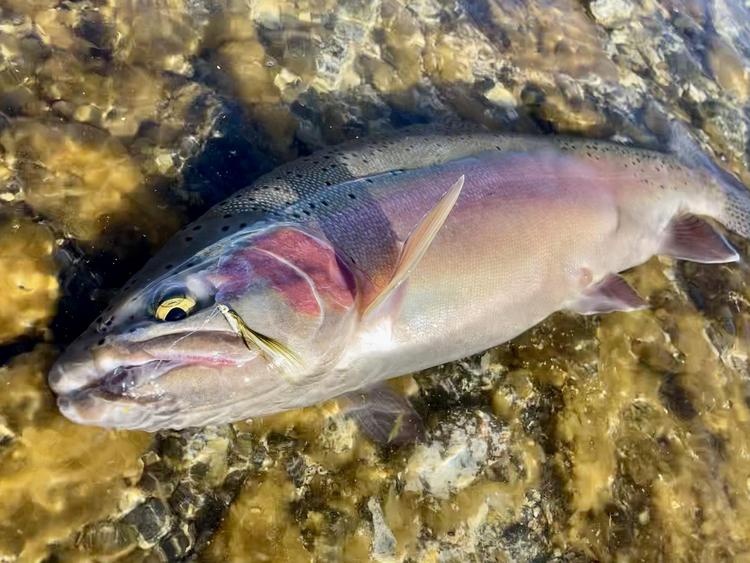 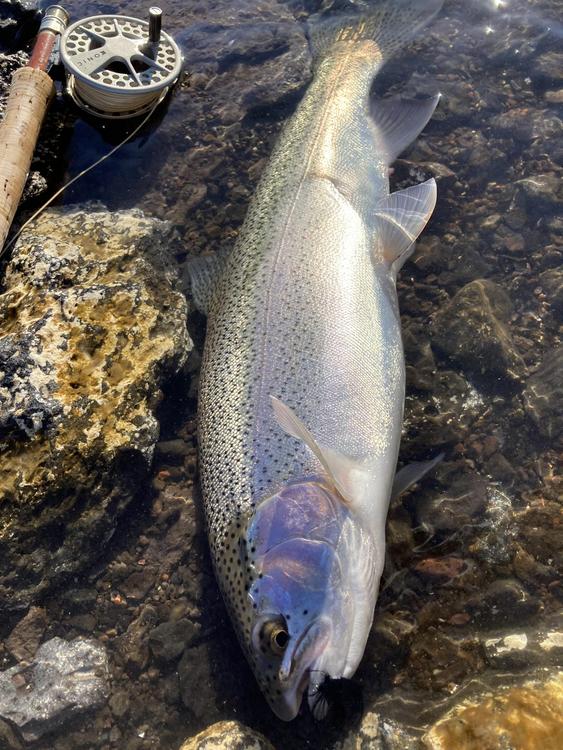 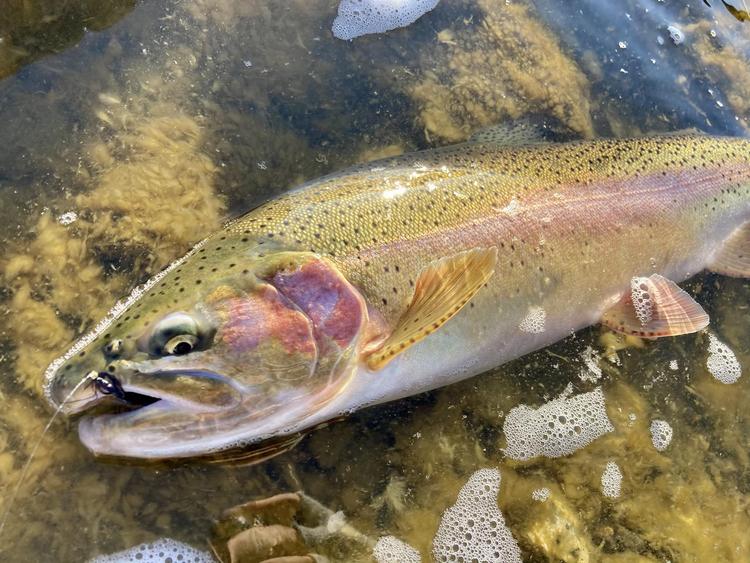 Back at camp, joe went to work on round two. A tortilla soup, followed by carne asada tacos, rice, beans, the works, and *greens. 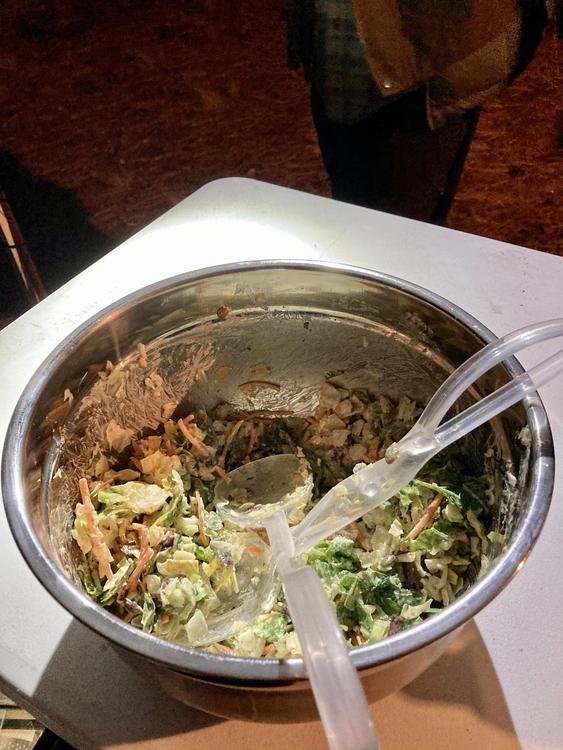 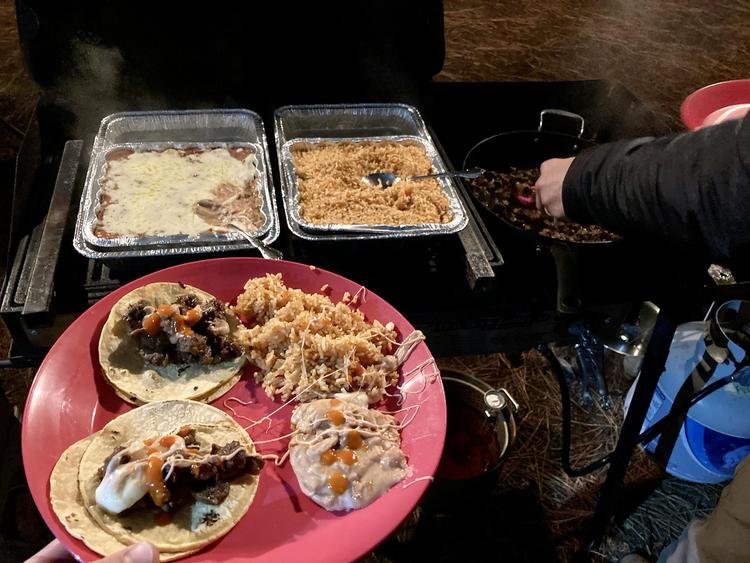 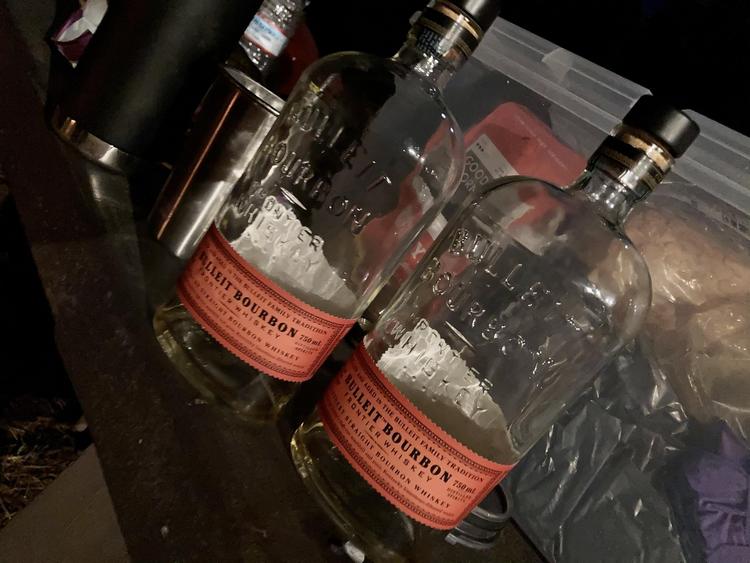 I woke up to take a piss and thought someone had a flood light on at camp. Just a very full, bright moon shining through the trees.

In the morning, camp was consolidated. Joe packed up and got on the road. Nick and I headed over to a spot nearby, put a few more on the board before heading out.

A few for the smoker. 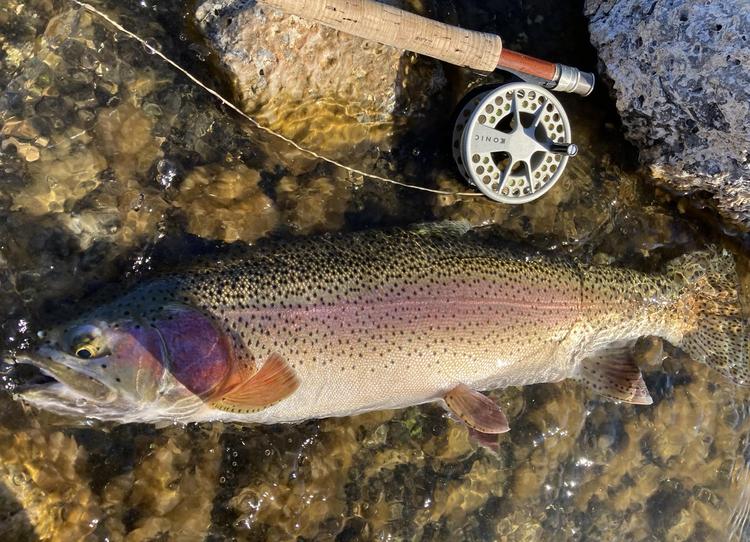 Packed up camp around noon and hit the road.

Cold, bright skies, full moon, light wind. All things considered, we made out alright, cant wait to do it again next year.

It's now Sir Barry Gibb, but to answer your question, I donated the Ranger to a charity at the beginning of the year. I've no idea where it is now, but I've no doubt it will outlast me.

On my way home from the lake I noticed an elderly gentleman putting gas into one at the pump across from me.

Great rainbows, whiskey, camp food (although I’m not sure I can even call it that) and solitude. It appears as if that spot has the appropriate amount of other fisherman that have F’d off by now. Worth the cold.

I’d also like to put in a request that jos[…]