Step one... forget your 15" Paella pan at home that you bought specifically for this dish.
Cut the recipe down to fit in a 10" cast iron pan.

Warm chicken stock and saffron over medium heat letting the saffron steep into the stock.

While this is warming prep your veg, seafood and debone the chicken. Season chicken with paprika. I use hot hungarian paprika to give it a little kick but a good smoked paprika would work as well.

Start a chimney of charcoal, dump and spread in a single layer, then add another half a chimney of unlit charcoal as a second layer.

Warm some oil in your pan then brown chicken and chorizo reserving for later. 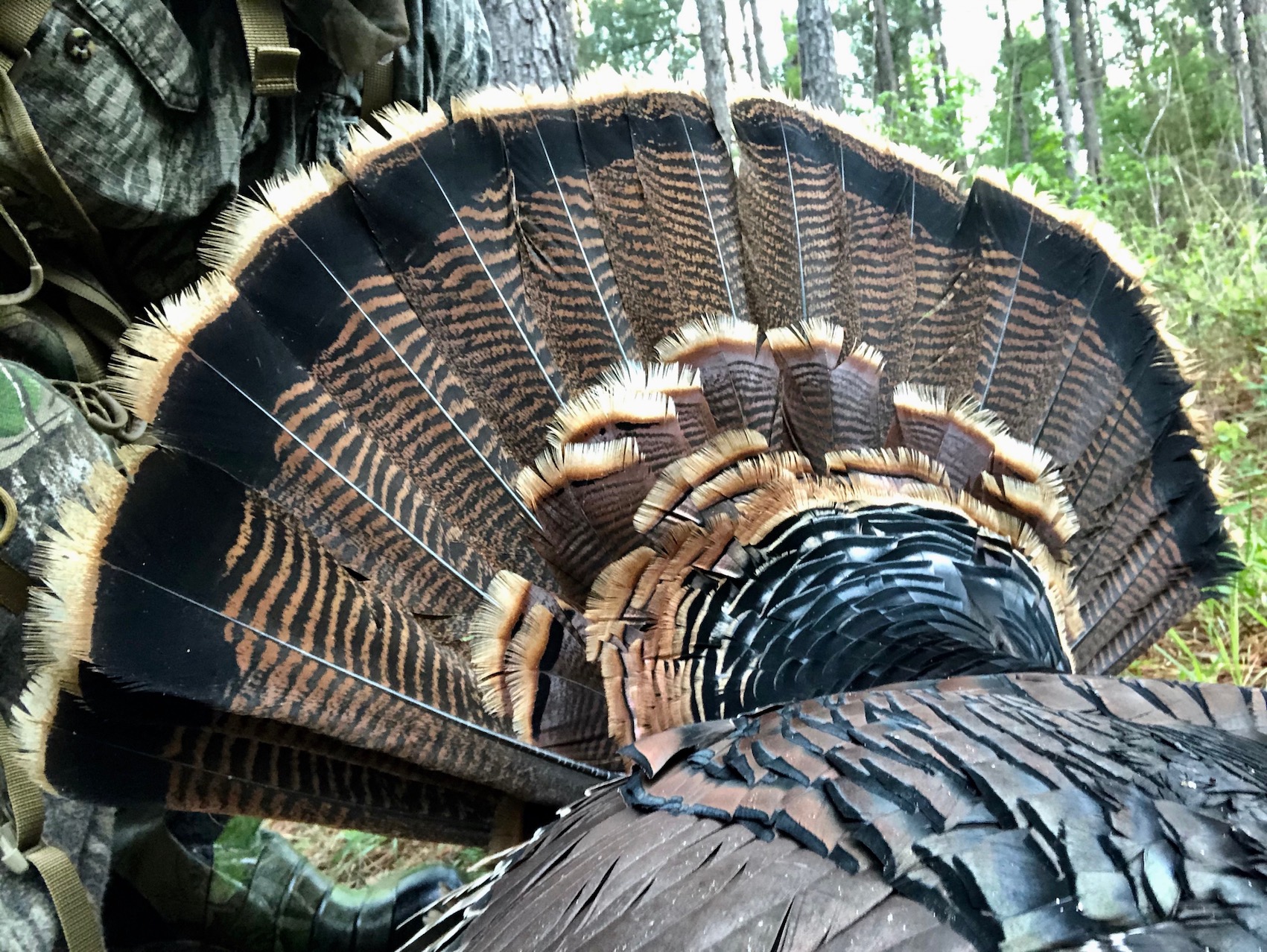 Step 2: Process wild turkey, and don't just pull the freaking breasts, but that's all this recipe will use. 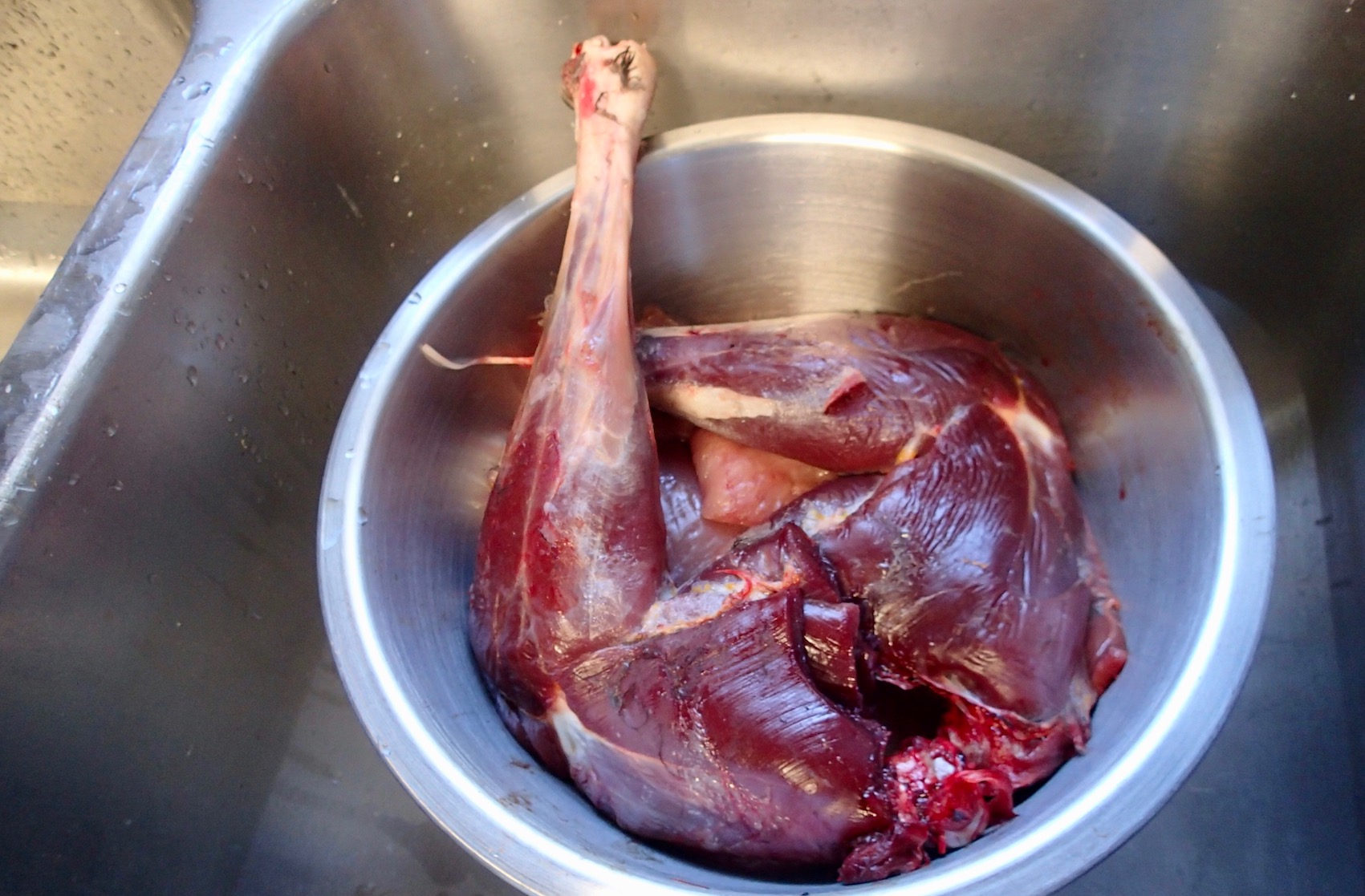 Step 3: Save meat until chanterelle season. When it's time, take breast out and brine in a simple brine (1 gallon water/1 cup salt/1 cup sugar/2 halved lemons/4 cloves garlic). Leave in brine for 24-48 hrs. 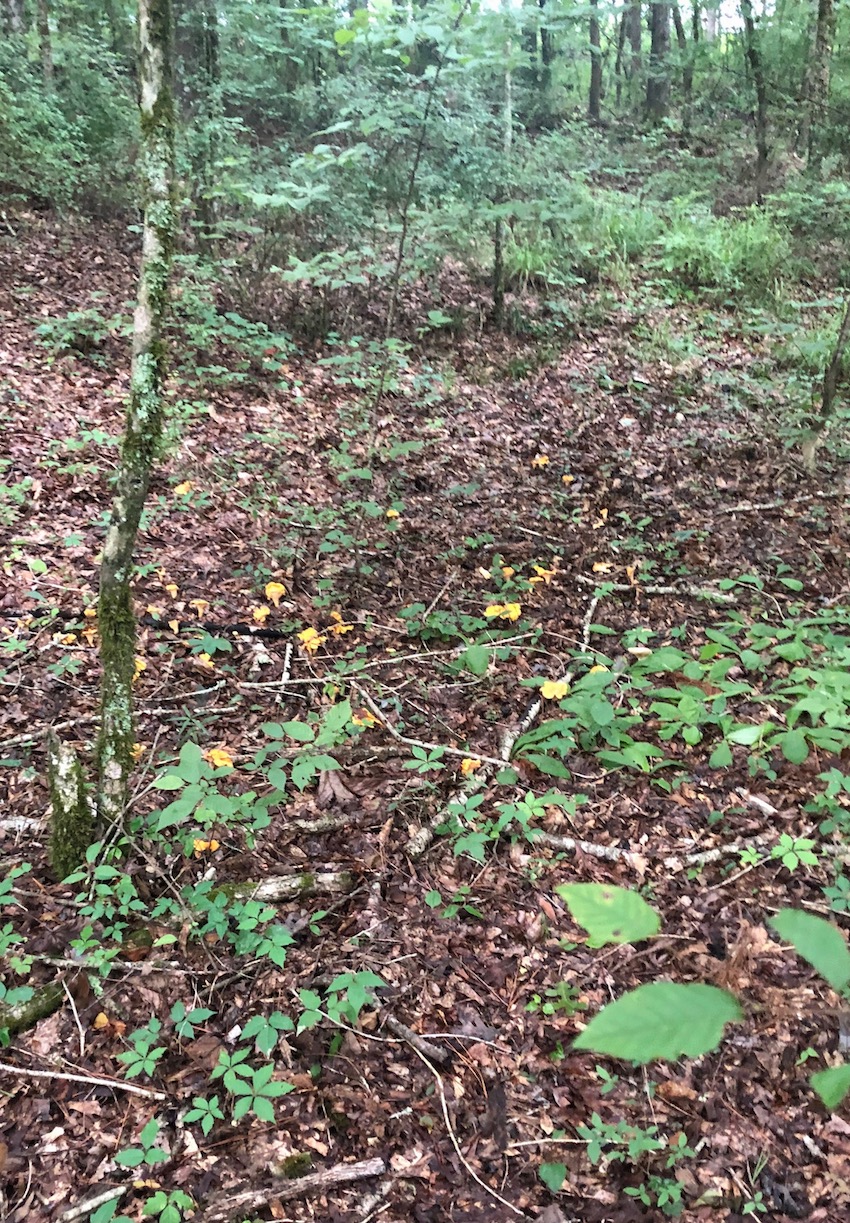 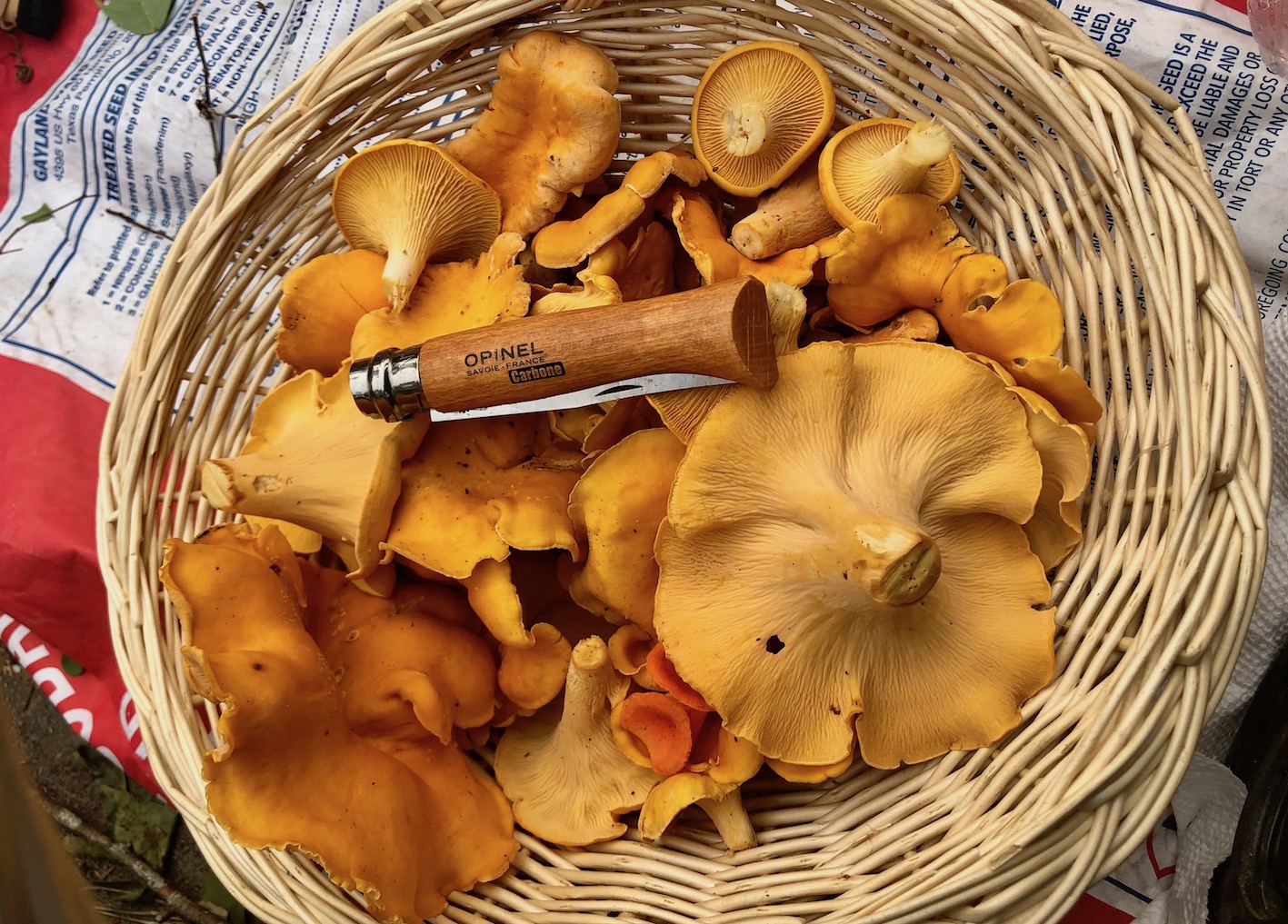 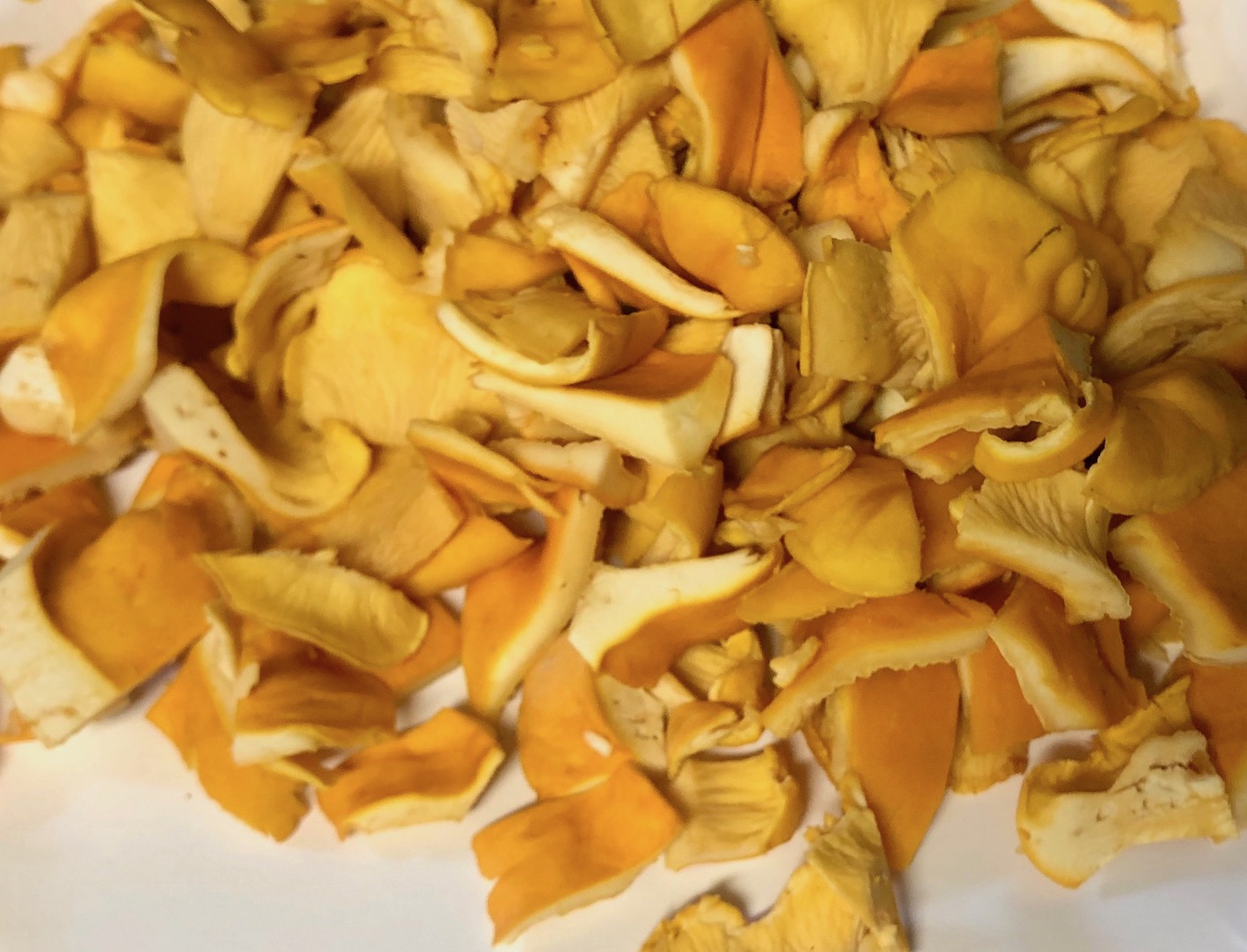 Step 5: Take turkey breast out and cut crosswise into a few smaller pieces. Then pound those suckers flat with a mallet. 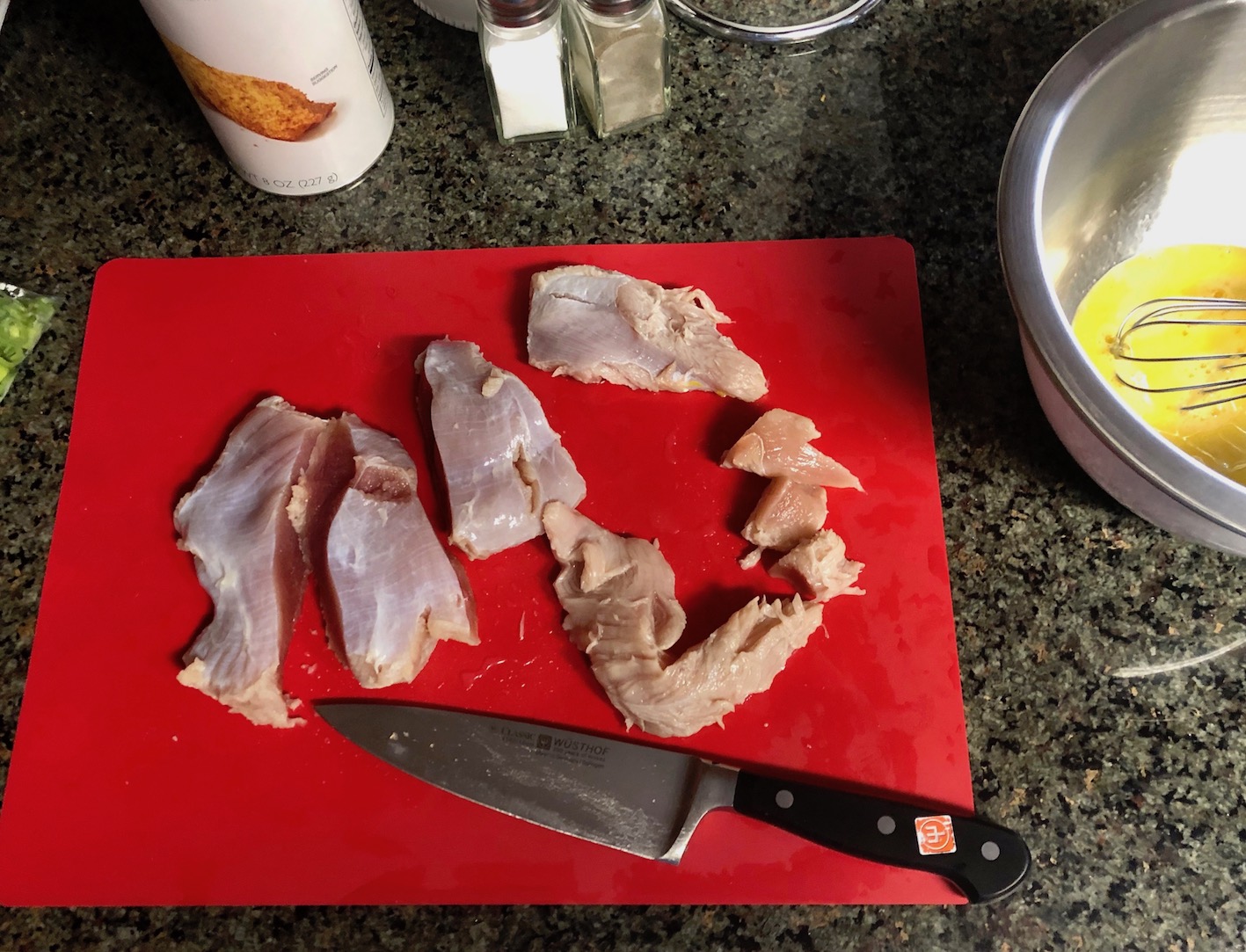 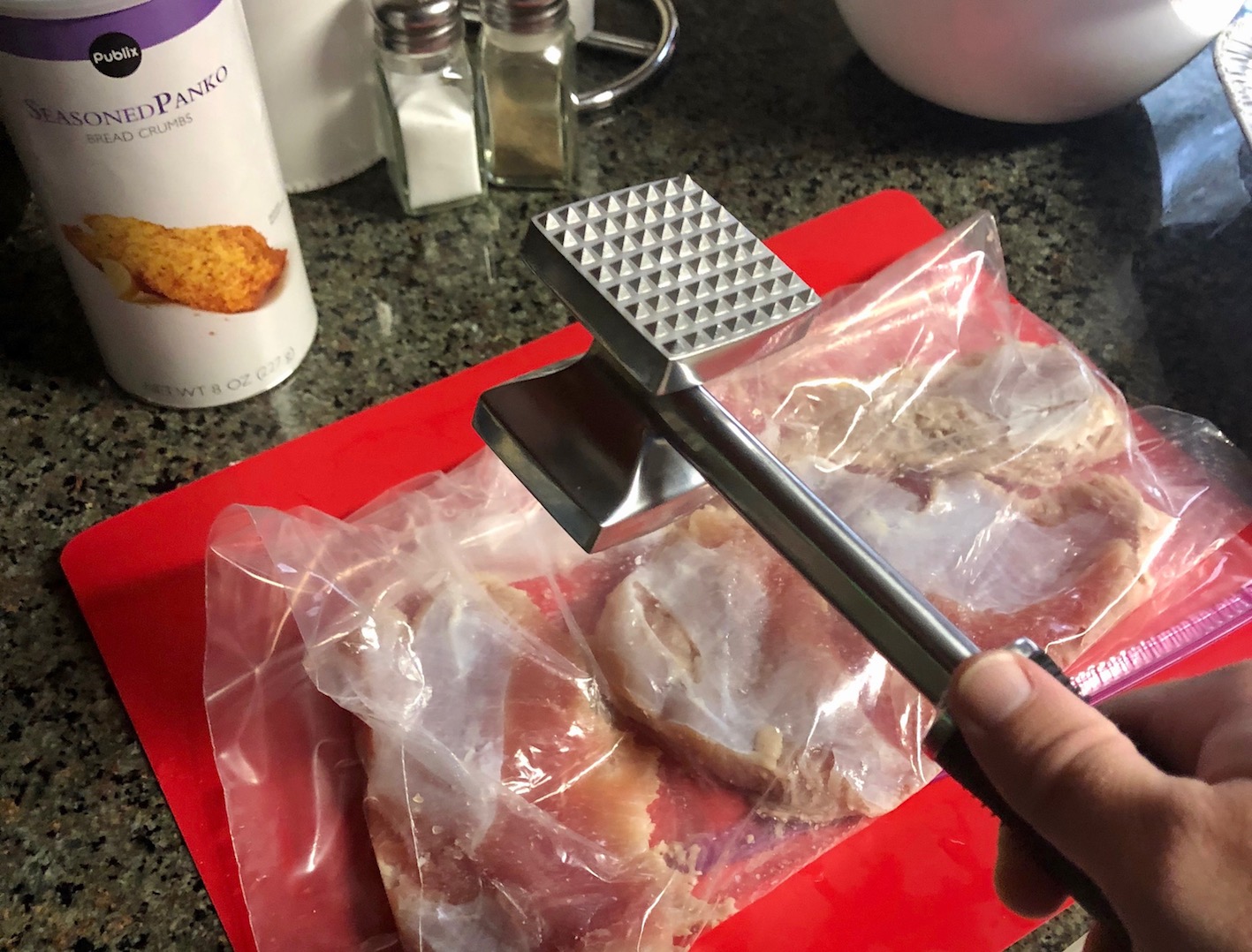 Step 6: Dip turkey into some beaten eggs, toss in seasoned flour, then roll in panko bread crumbs. Fry using your method of choice. I'm in Alabama, so they were deep fried. 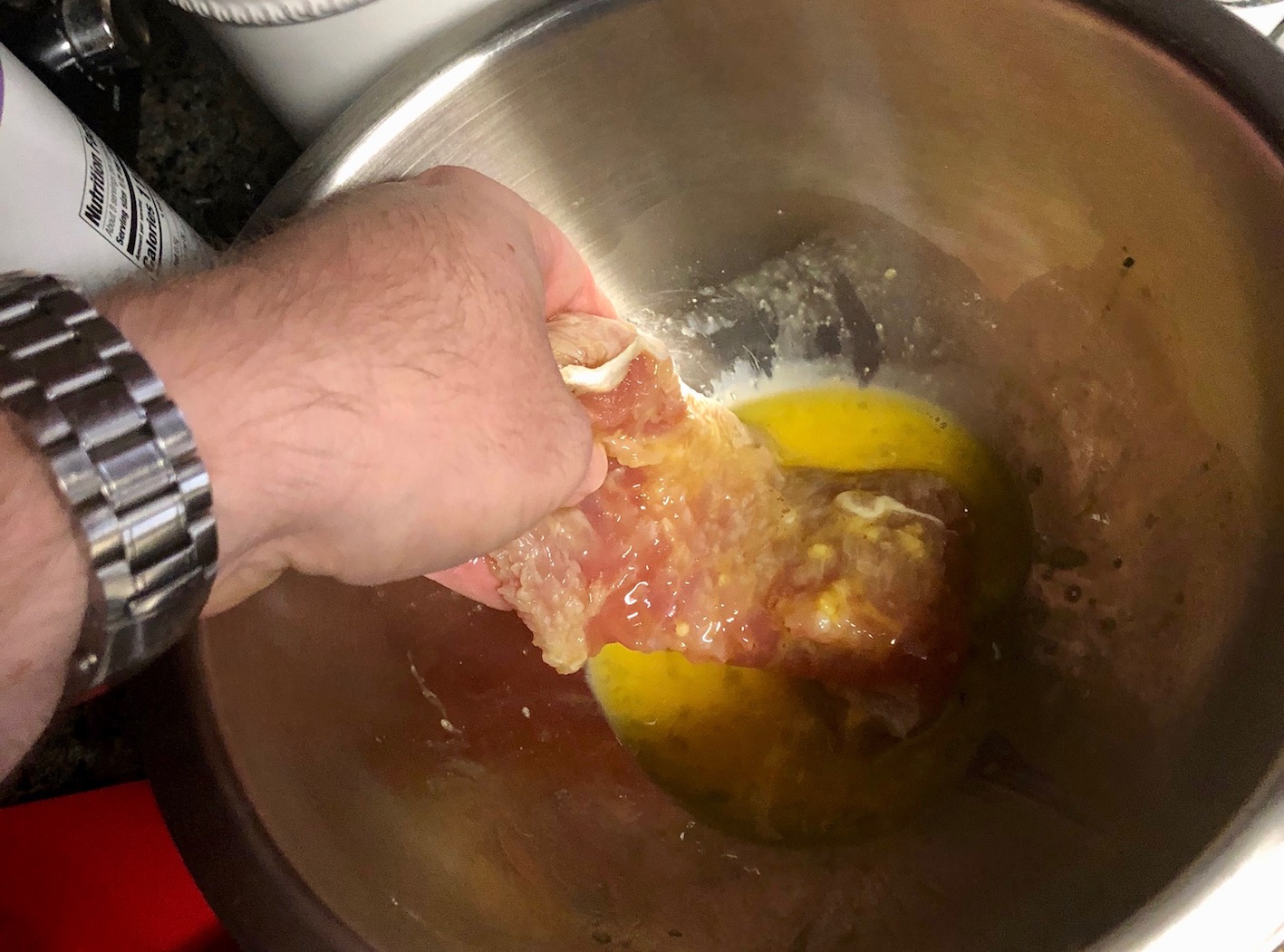 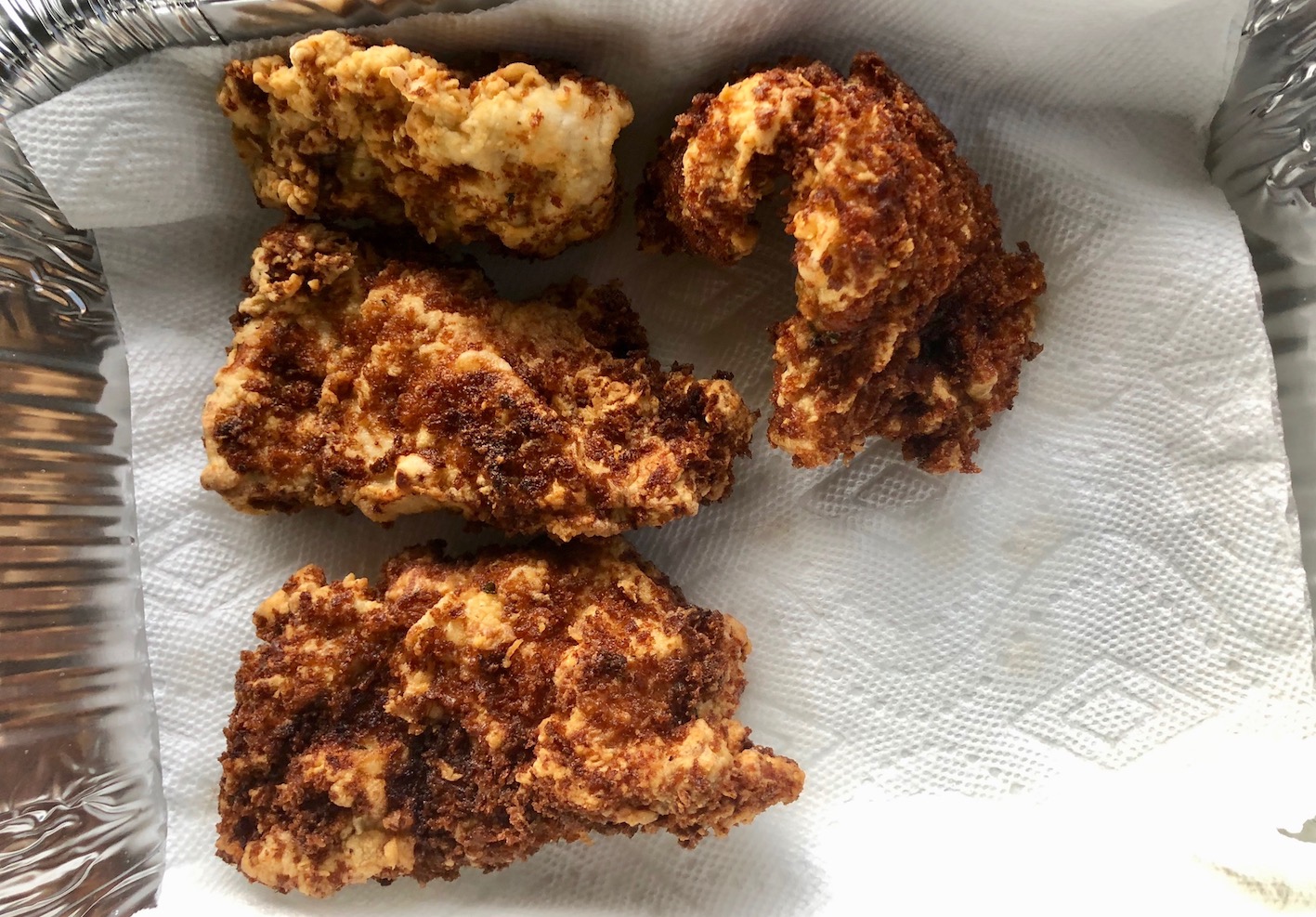 Step 7: You need some sides. Since schnitzel is German, might as well braise some cabbage and make some sort of potatoes. I boiled some red potatoes, mashed in milk and added scallions, garlic and parmesan. For the cabbage, I chopped it up and braised it with some bacon and chicken stock. 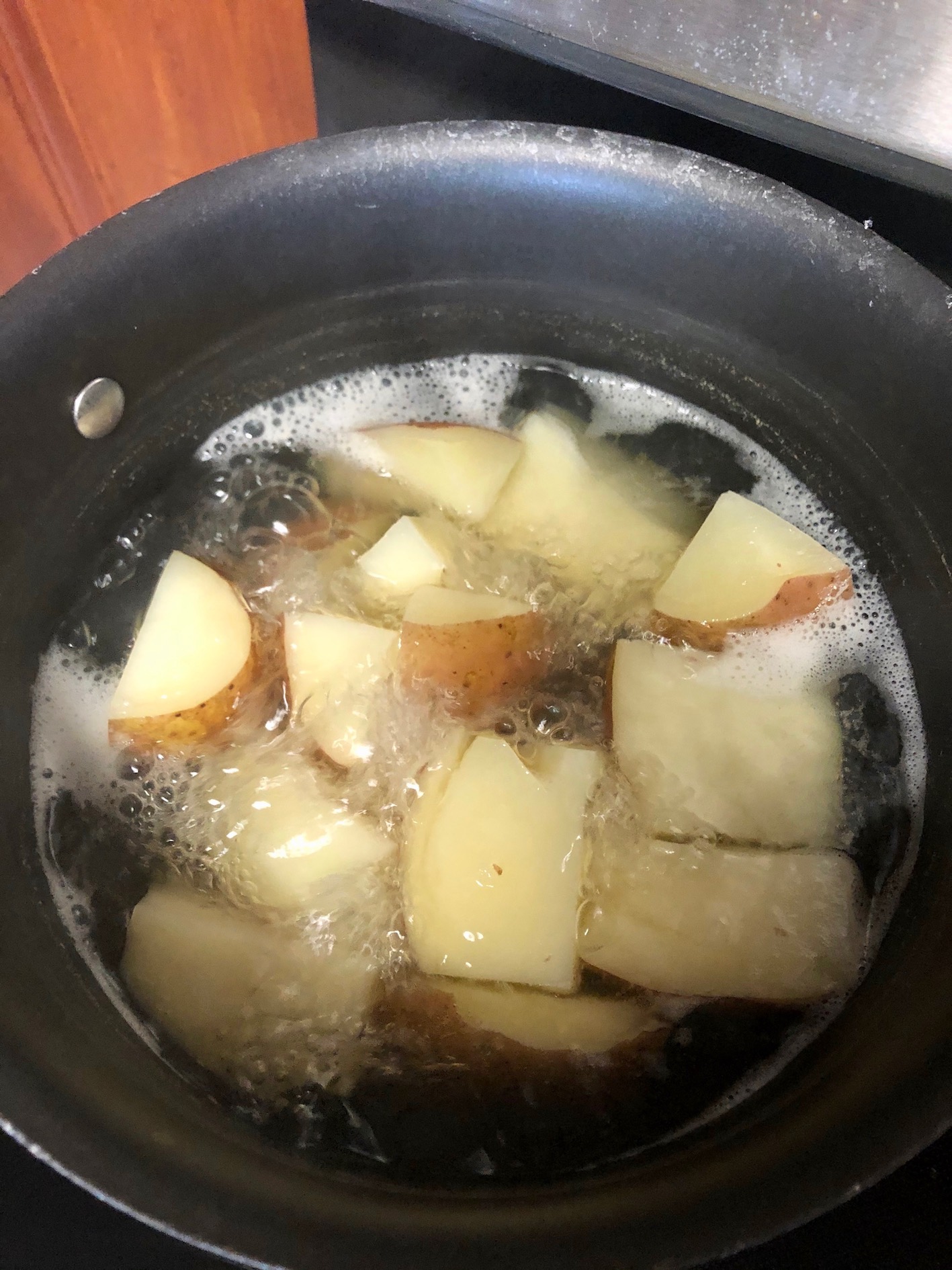 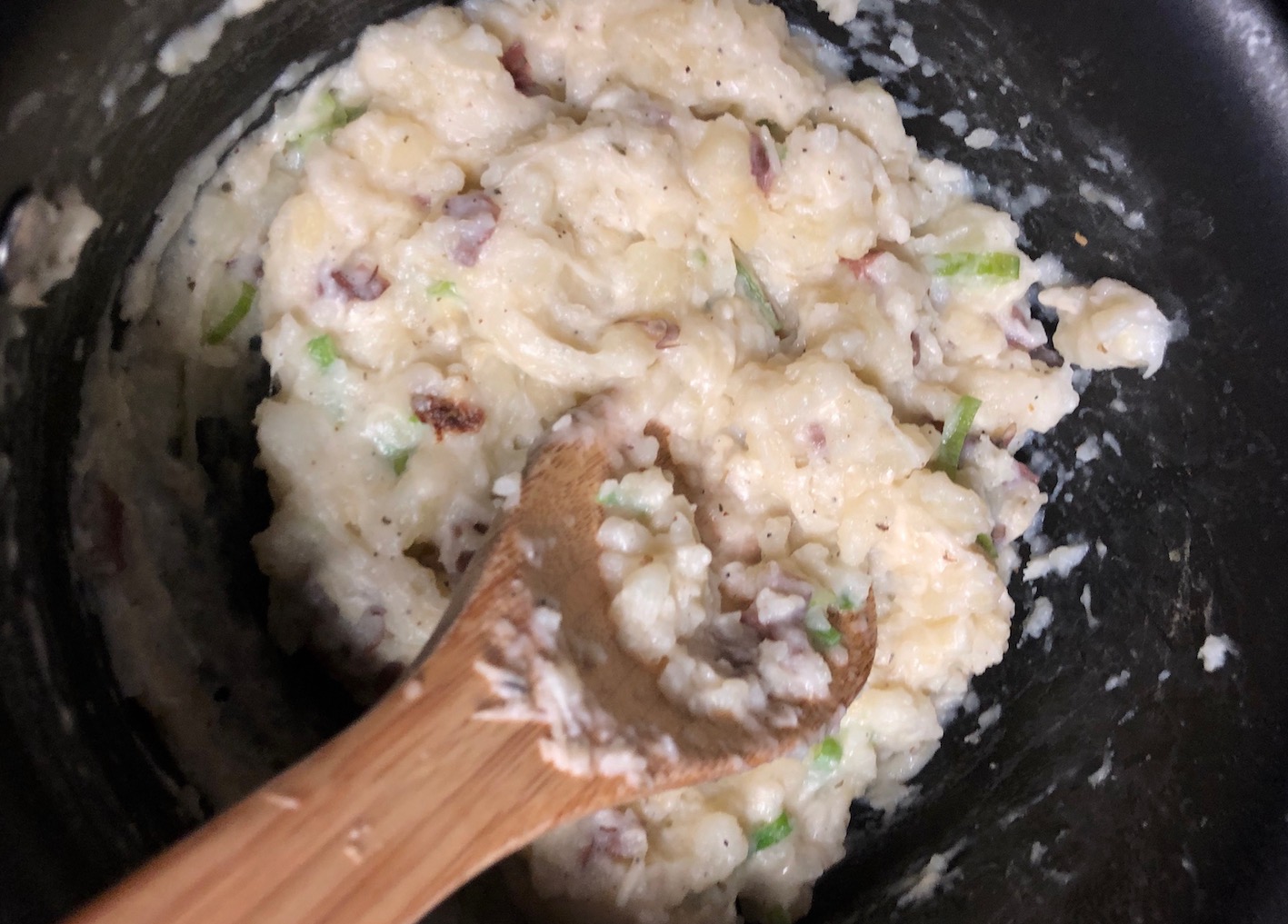 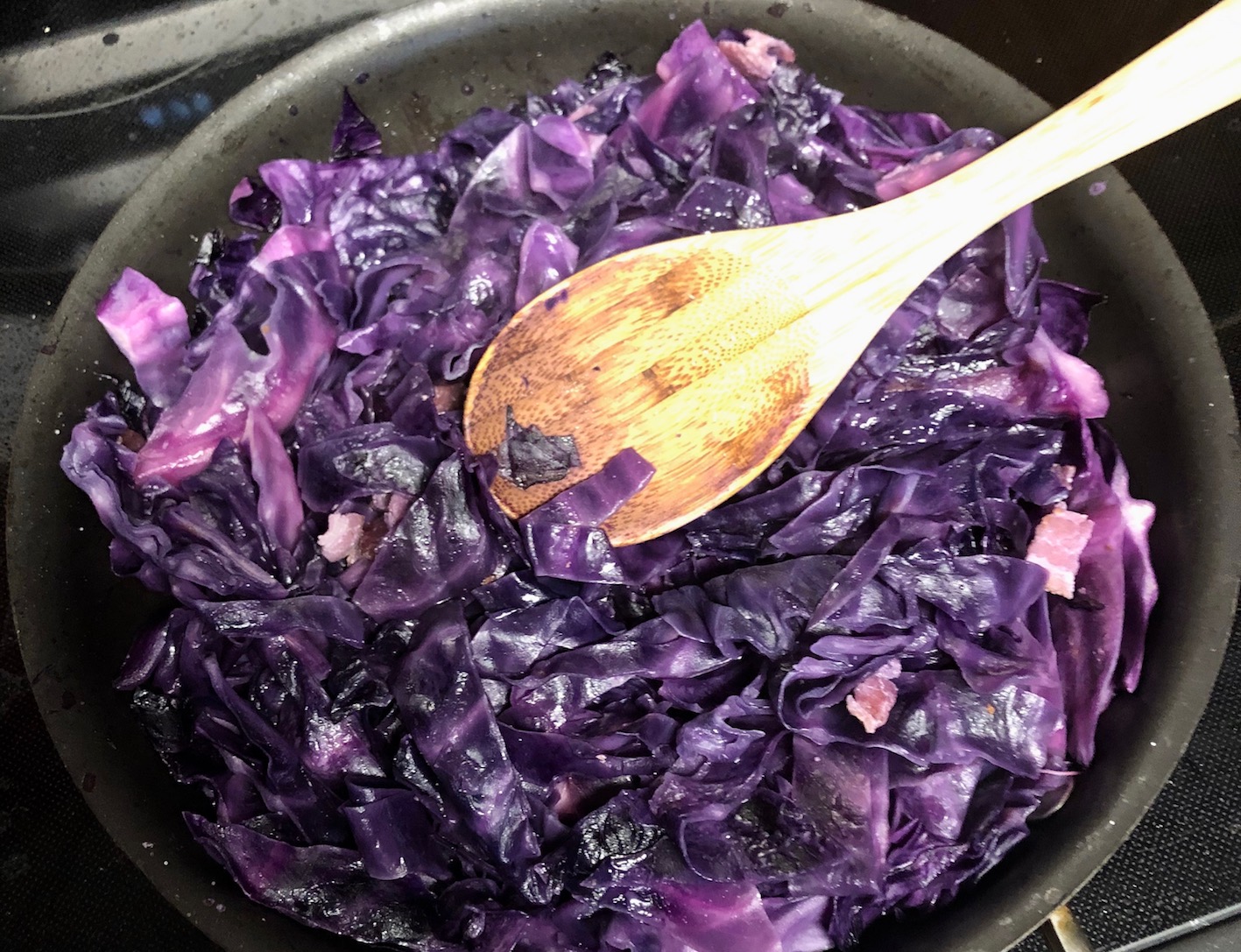 Step 8: To make the chanterelle cream sauce, I throw some finely chopped onions (2 tbsp) in a pan with a melted pat of butter. When they're translucent, throw in 2 cloves of minced garlic (I like to use a garlic press). 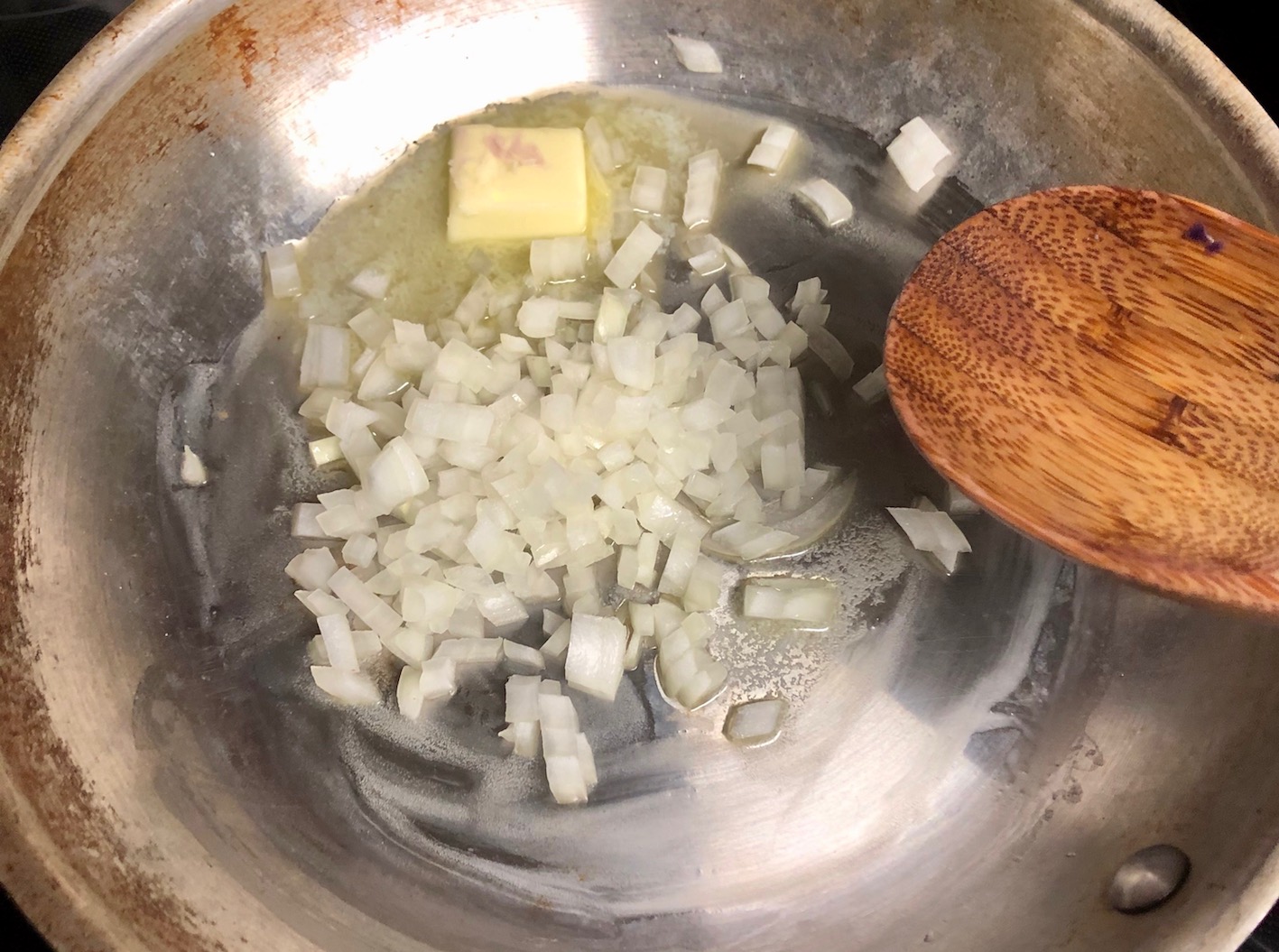 Cook for a minute and add in chopped chanterelles. 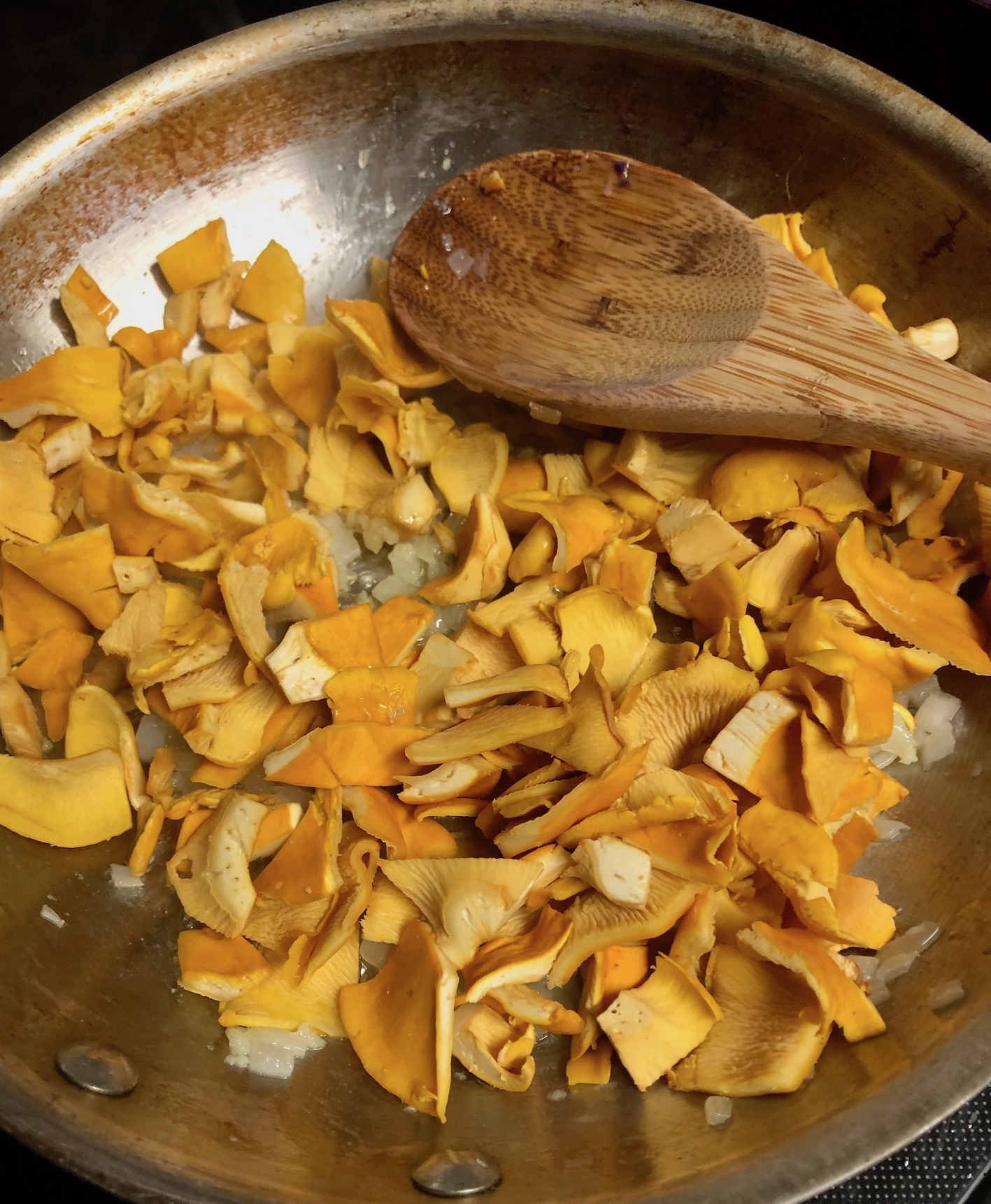 Cook for a couple more minutes then add in 3/4 cup of heavy whipping cream, 1/4 cup white wine, 1/4 cup chicken stock, and a dash of worcestershire sauce. Bring to a boil then reduce and let simmer for ~5 minutes. 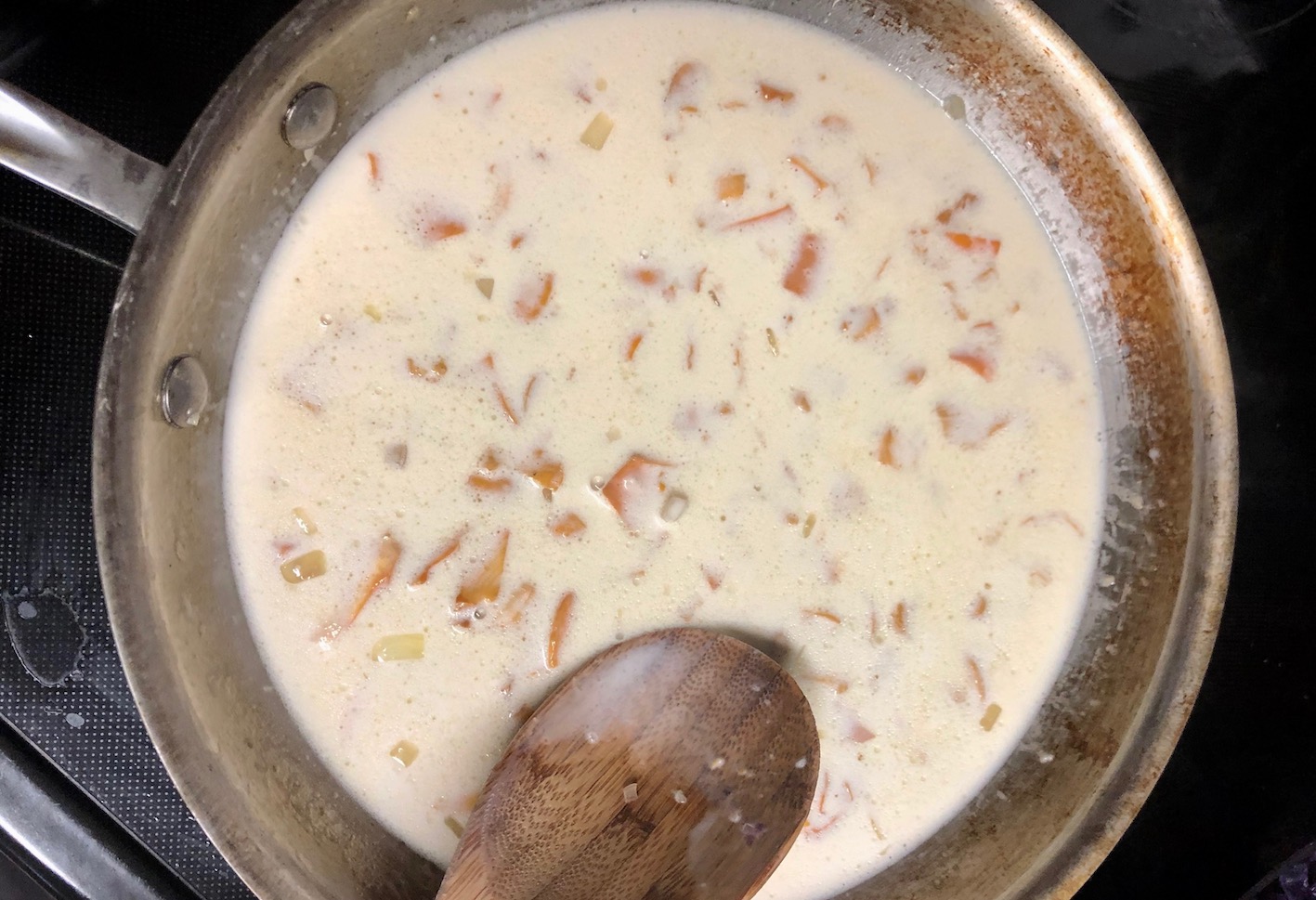 Step 9: Plate it all and devour it. This was sooo good. Even better that the chanterelles and turkey were both harvested about 30 yards (and about 3 months) apart from one another. 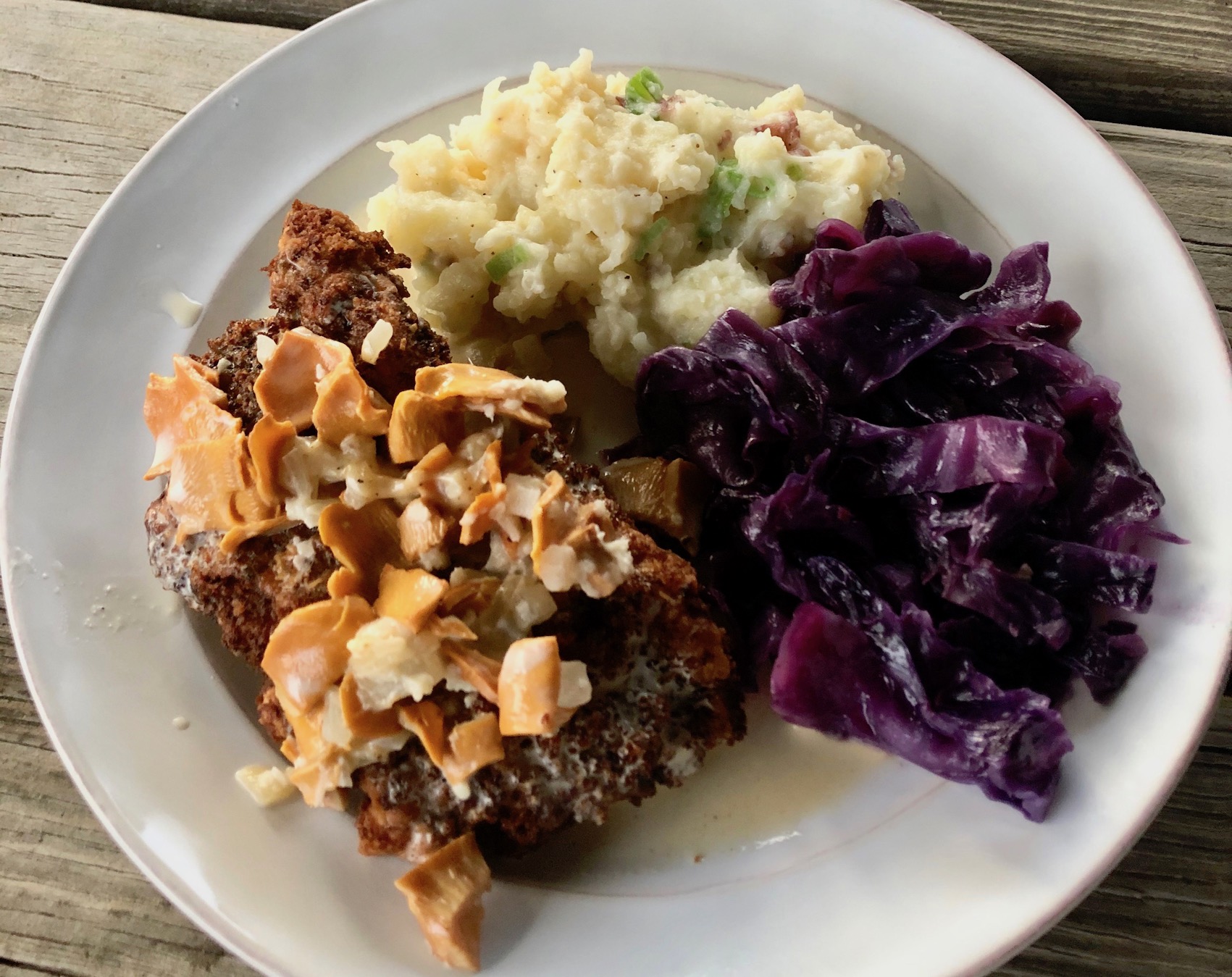 "Don't ever underestimate the power of a good blue line session with a 1wt. Shit gets settled out on the boulders, things get prioritized. And, in the end, you put something back in the tank..." -wandering blues

One of my favorites. If I got more morels in these parts, it might be a toss up.
"Don't ever underestimate the power of a good blue line session with a 1wt. Shit gets settled out on the boulders, things get prioritized. And, in the end, you put something back in the tank..." -wandering blues

A day before you plan to cook them, or at least an hour before, whisk 1/4 cup of sugar in a bowl with 1/2 cup of rice wine vinegar and 1 tsp of salt. Julienne some cucumber and carrots and place into a bowl with the vinegar, toss around and let sit in the fridge. 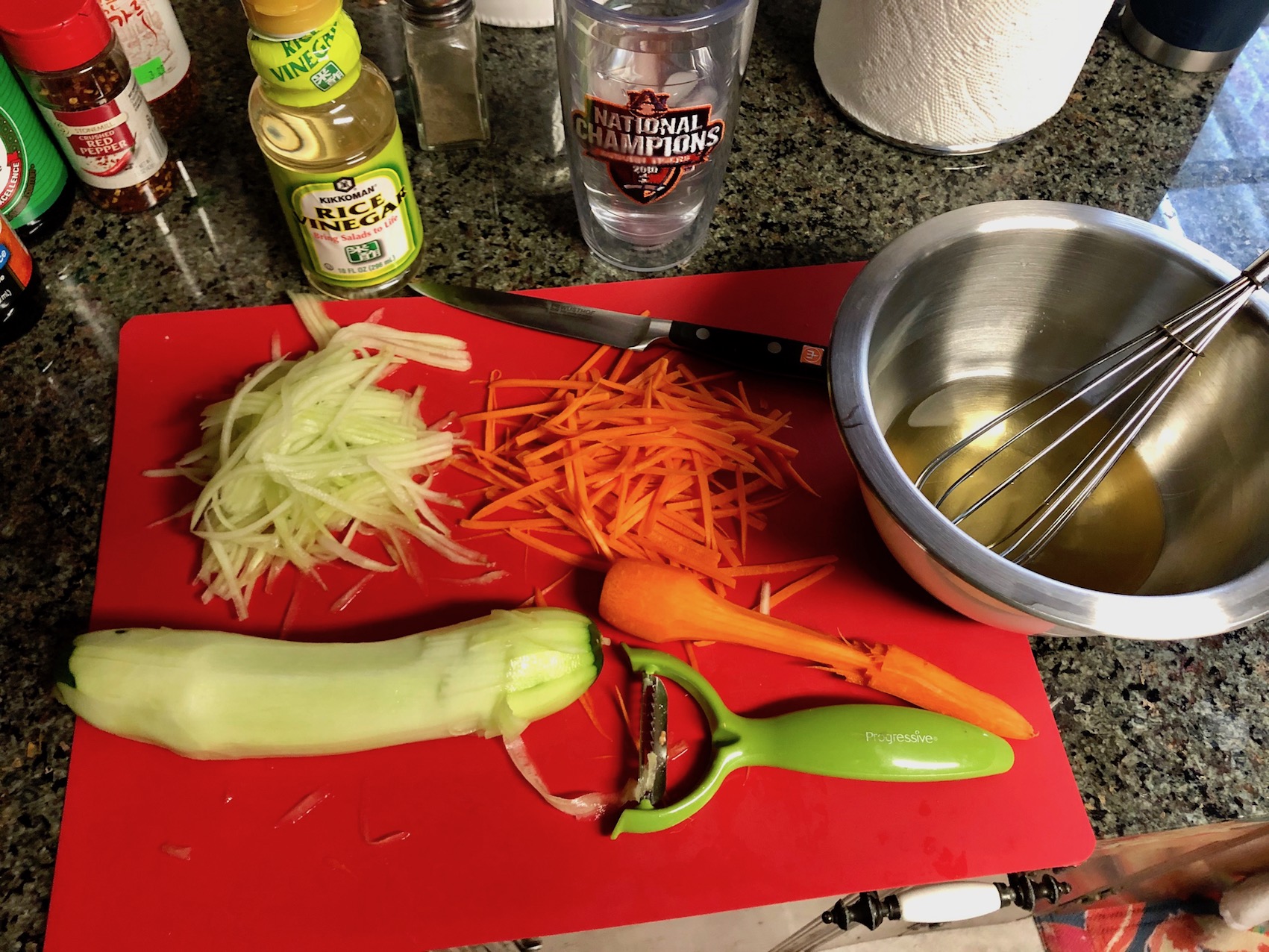 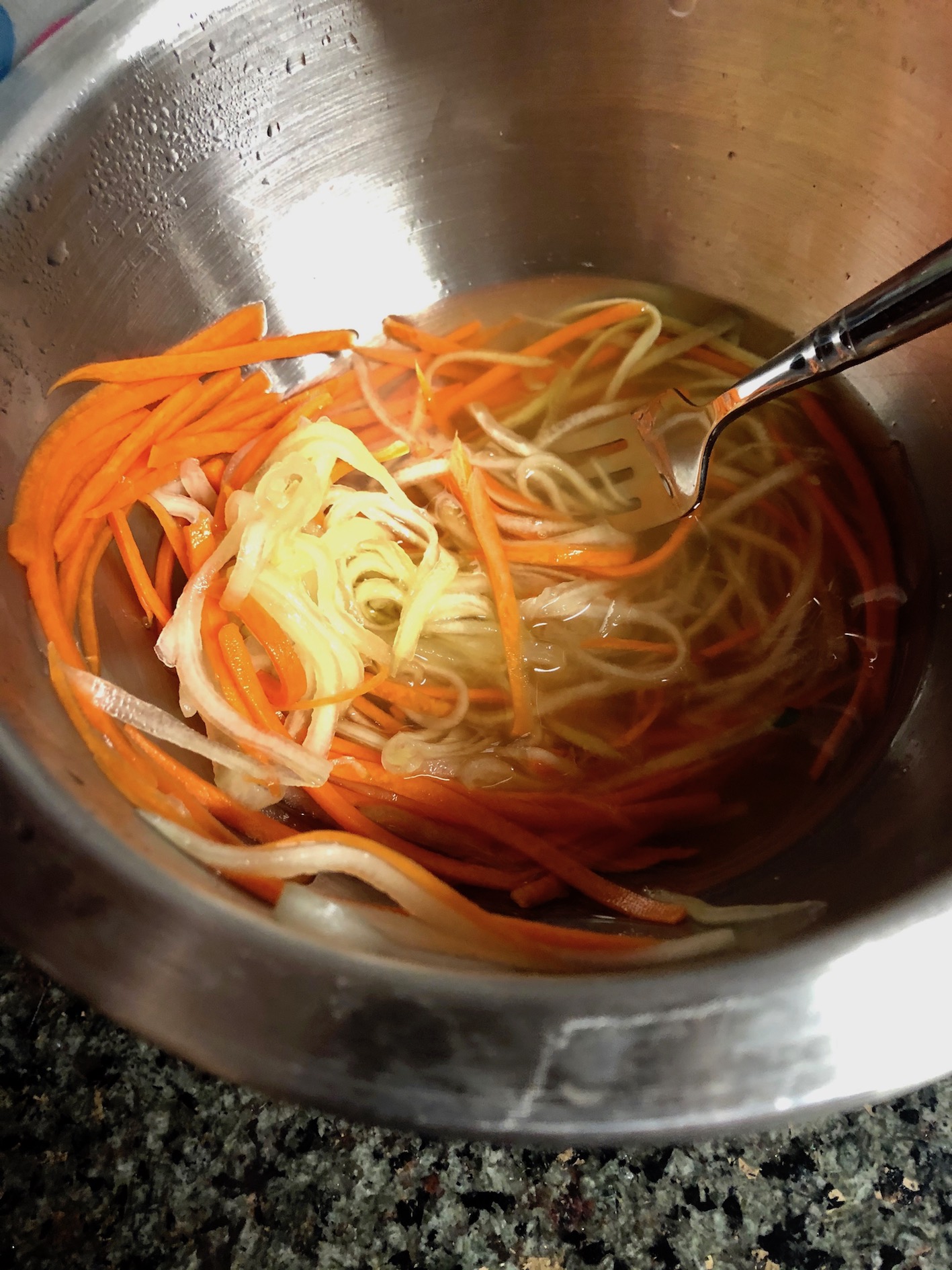 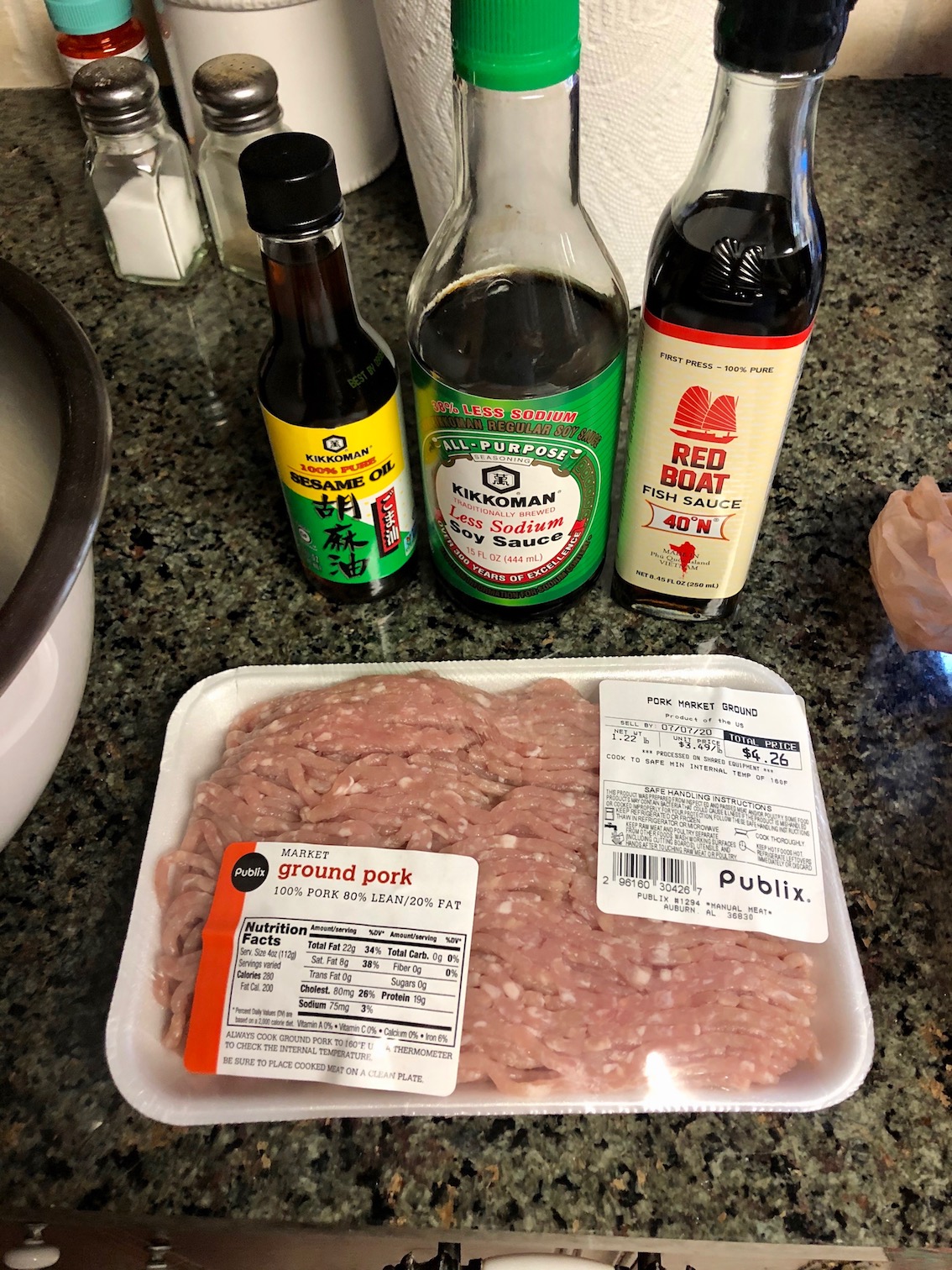 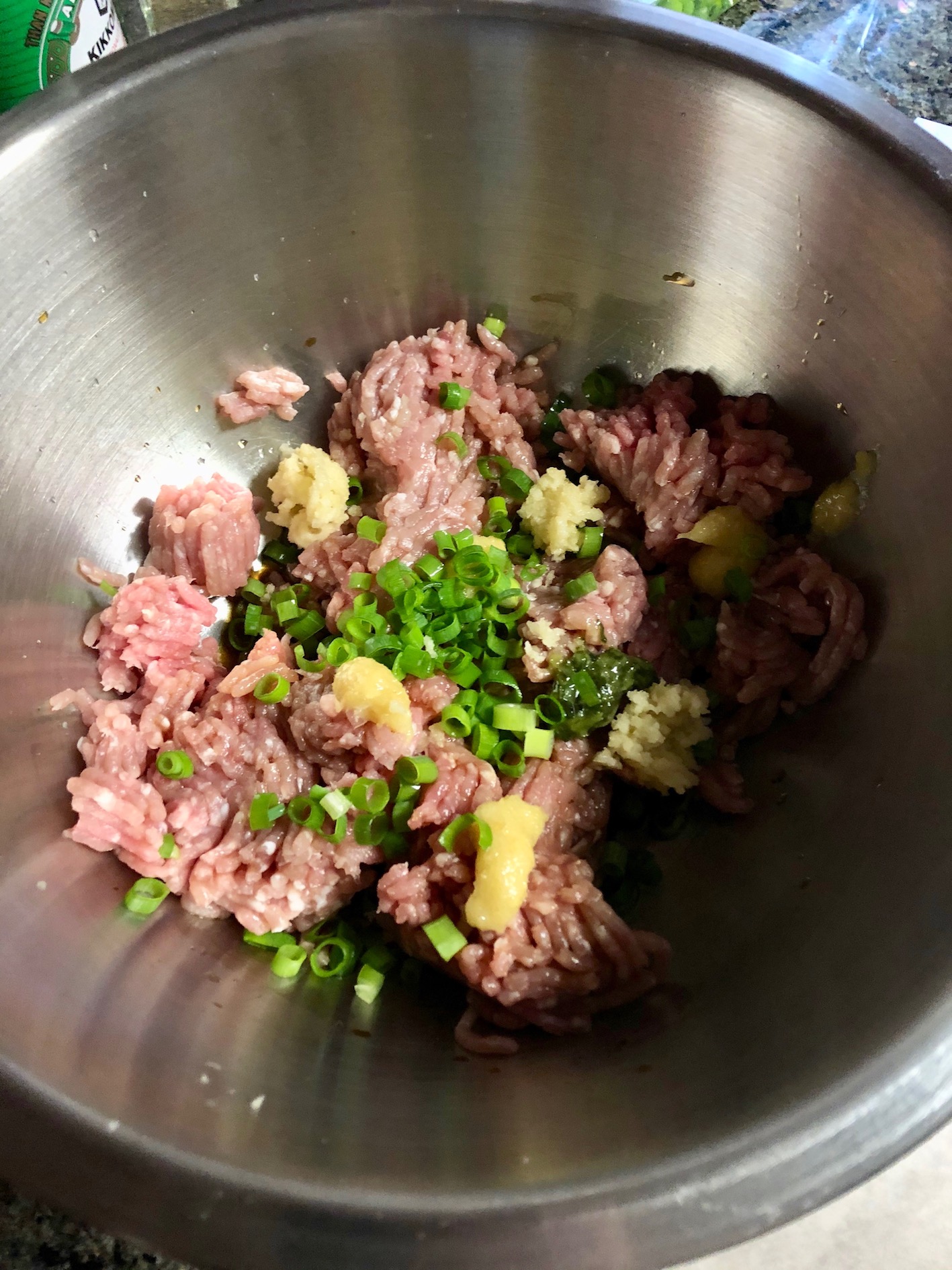 Patty out and put on a pre-heated charcoal grill. 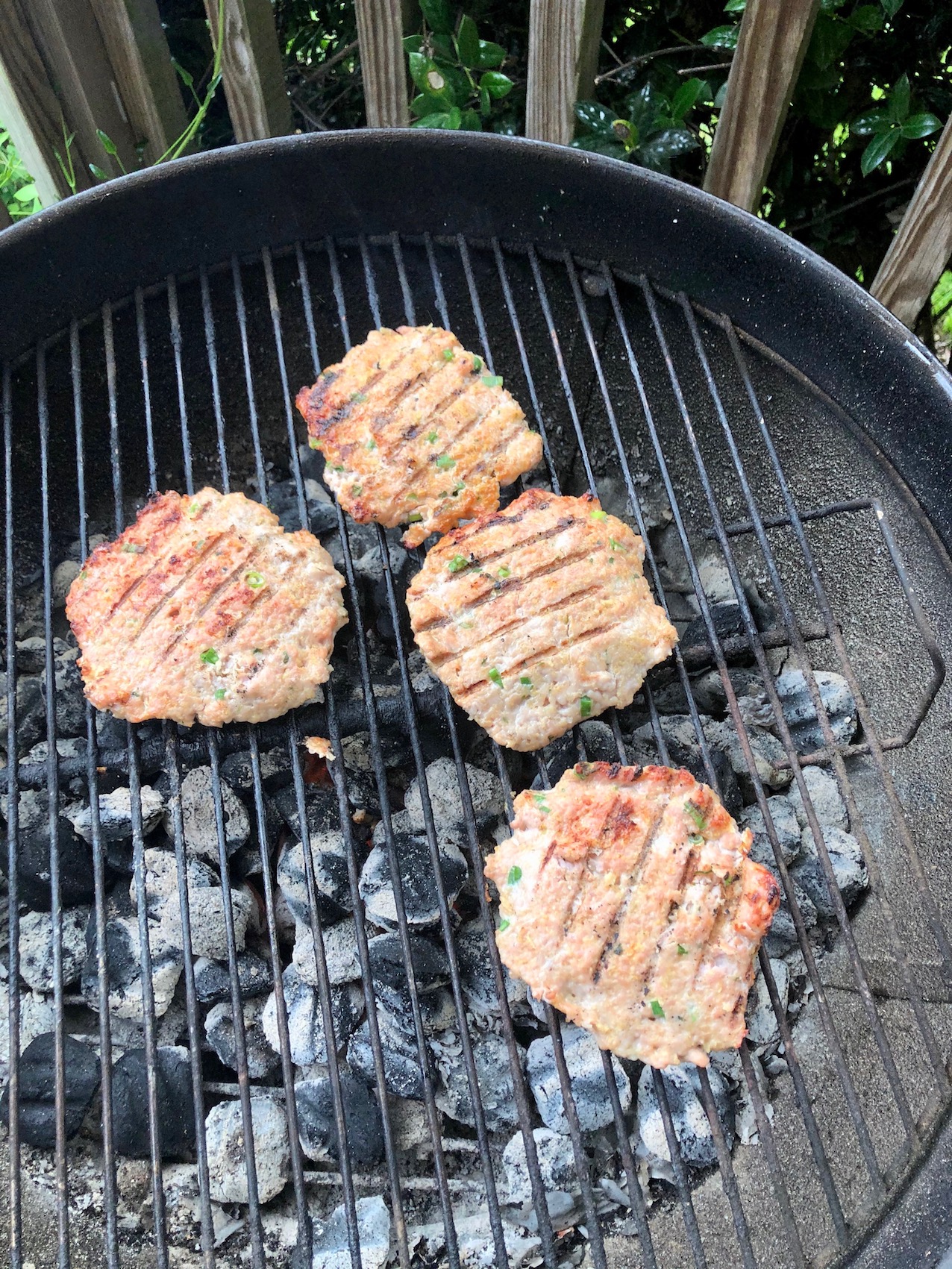 Heat over med/high heat for 1-2 min and add tater tots, tossing to coat, then cook another minute. Take off heat and sprinkle with black sesame seeds and fresh chopped scallions. 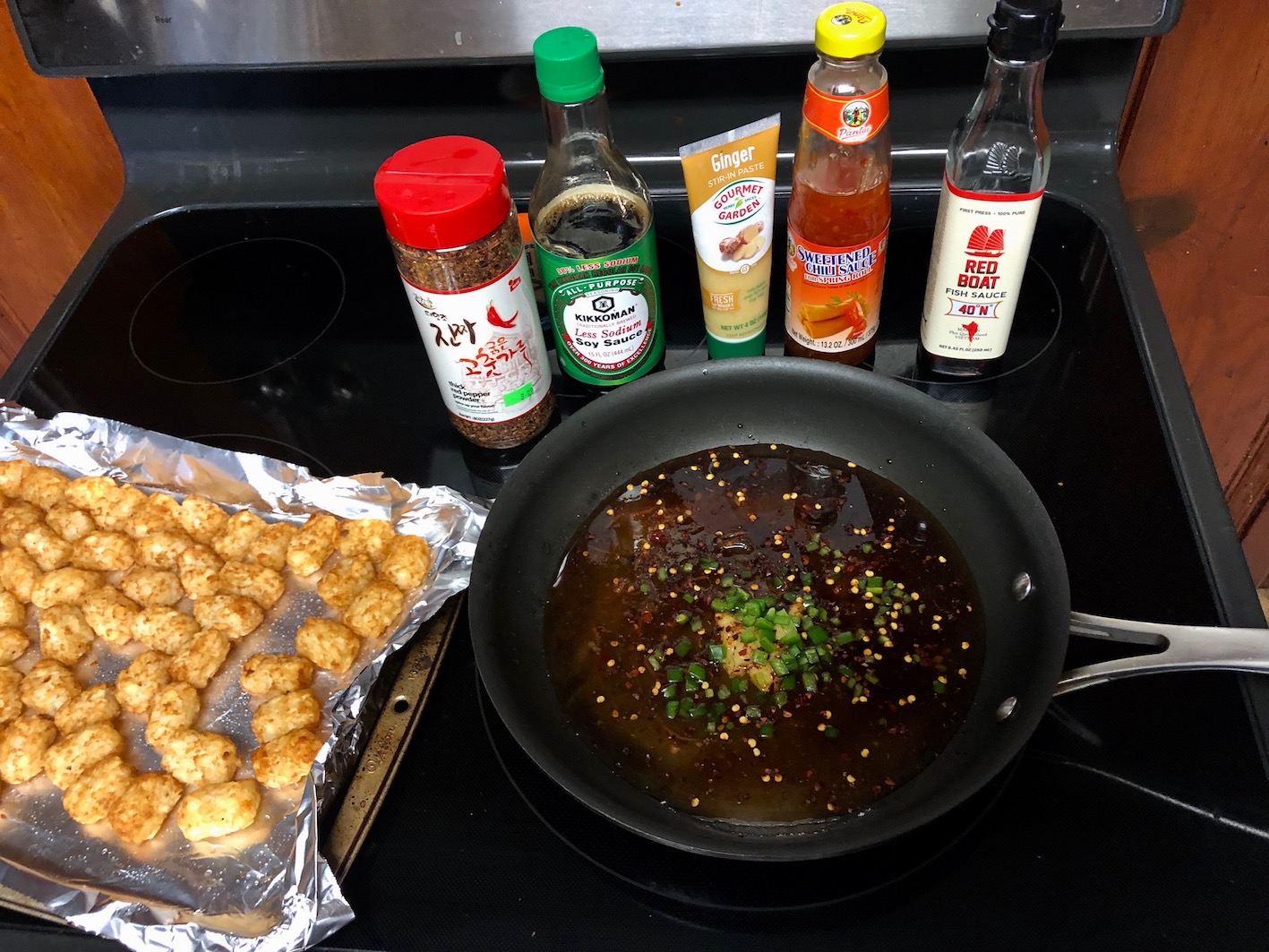 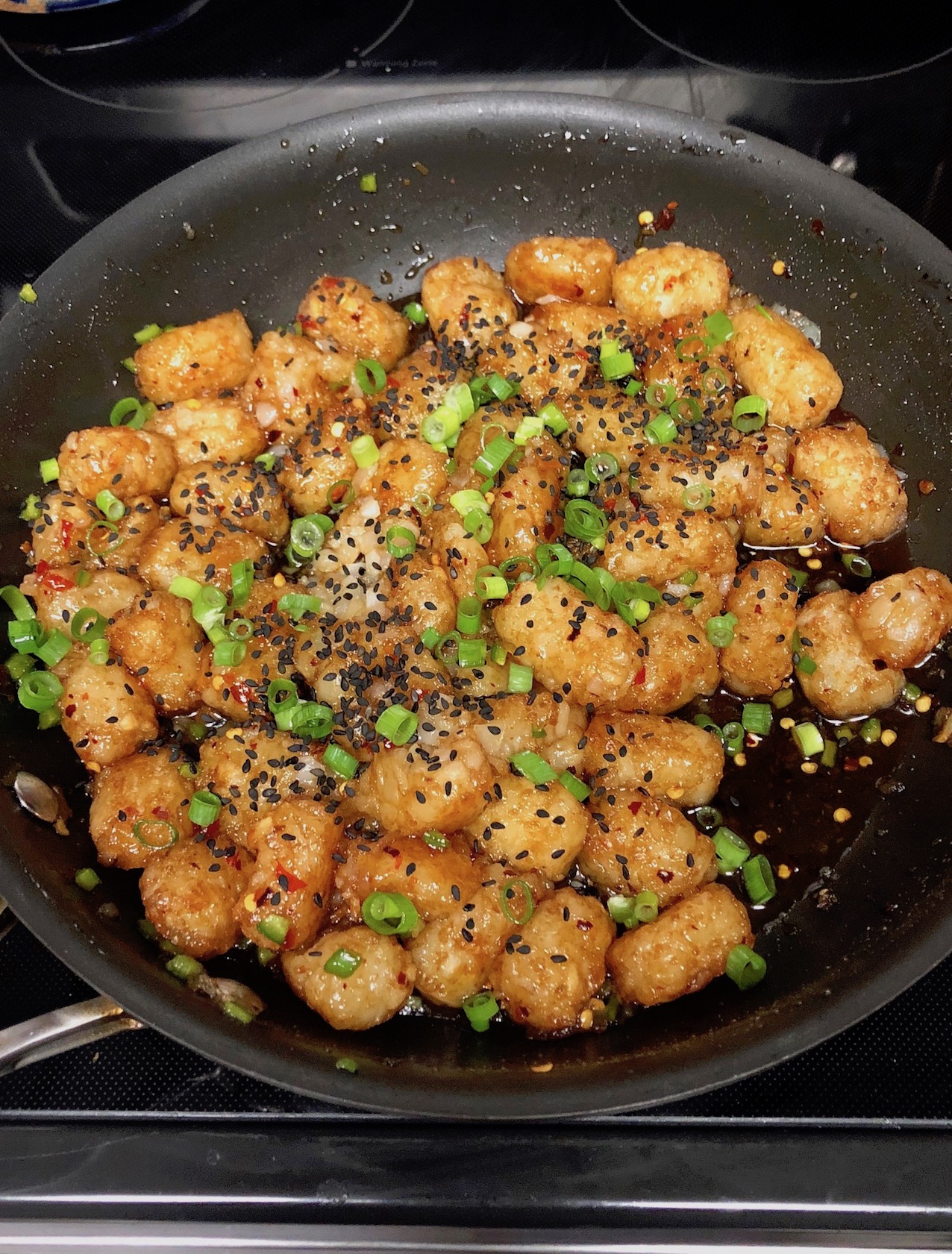 When burgers finish, place patty on toasted bun and top with pickled carrot/cucumber. Mix up some sriracha mayo and use liberally. 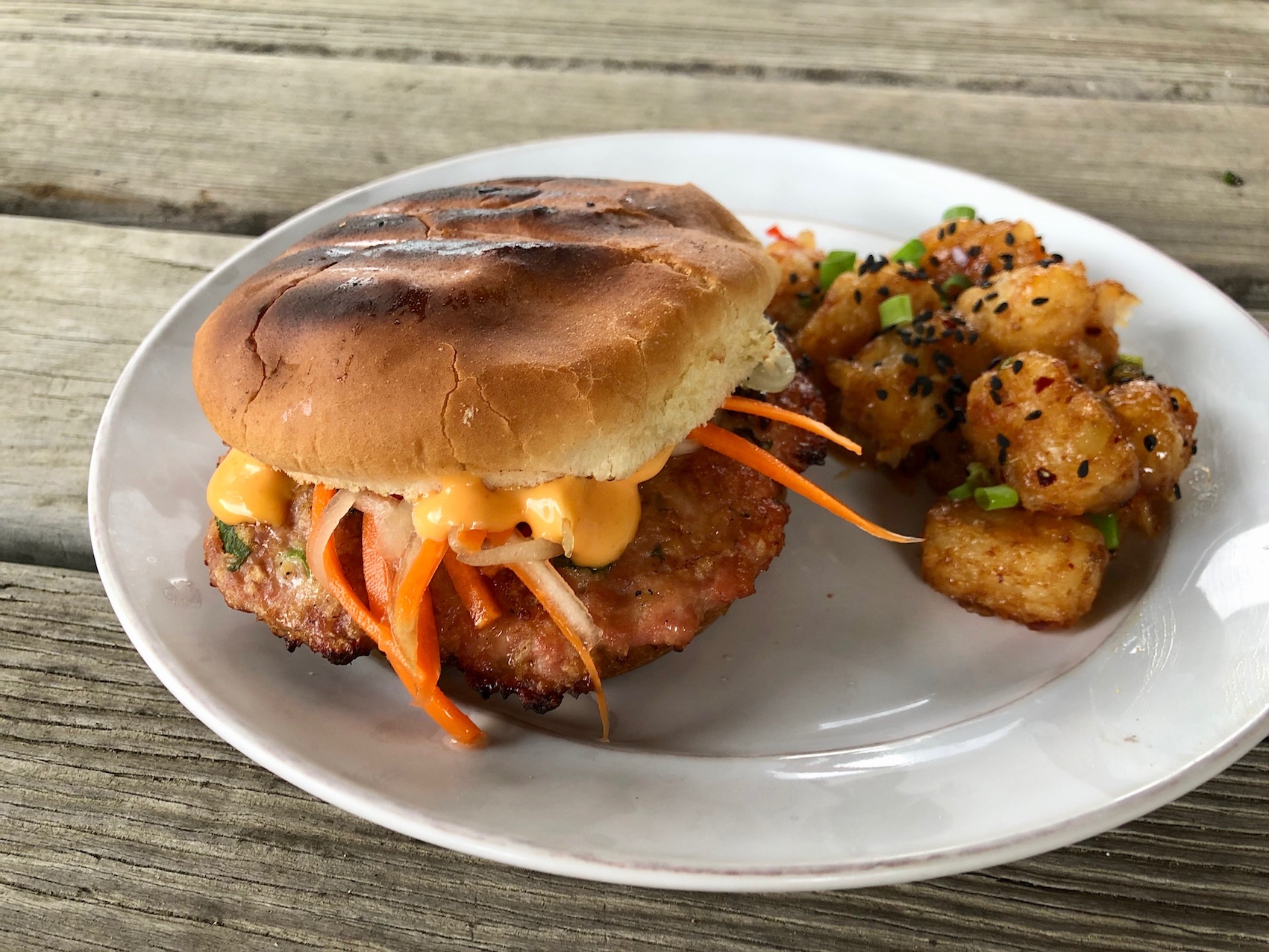 If you want, squeeze some eel sauce and spicy mayo over the tots to really go all in.
"Don't ever underestimate the power of a good blue line session with a 1wt. Shit gets settled out on the boulders, things get prioritized. And, in the end, you put something back in the tank..." -wandering blues

sittymkt.JPG (130.64 KiB) Viewed 304 times
A "low church" of sorts, City Market in Luling, TX is often overlooked for the joints just a few miles north in Lockhart. Kreuz, Smitty's, Black's...good pit meat for sure, but City Market has 2 things they do better than most - wet sausage, and sauce.

For the moment, forget about the wet sausage. It will have its day in the sun, but the real reason I am writing all this is to tell y'all about their beautiful, mustard-y, peppery sauce.

Unlike Kansas City, Memphis, the Carolinas, and a shitpile of other places around the states, most of the central TX barbecue purveyors forego sauce. If you ask for sauce at Louie Mueller's in Taylor, TX, the nice fella at the pit scowls at you, and the nice lady tottin' up your order nervously puts some grill drippings in a cup and charges you a buck for 'em. "Good barbecue doesn't need sauce!" is the refrain from most of the well-respected Texas Pitmasters, and for the most part, they are pretty spot-on. In a different setting, asking for an adjunct to alter the flavors of the offering a chef has toiled hours and decades on perfecting would probably be met with scorn and derision as well, so why not for 'cue?

sittycue.JPG (82.46 KiB) Viewed 304 times
But for some folks, barbecue sauce is the yin to the meat's yang, the sunshine to its moonglow, the...well, you get the picture. I'm one of those folks, and while drippins are a passable substitue (as long as the 'cue is good), I am a firm believer in the synergistic powers of a well-wrought barbecue sauce.

Without further ado - the closest I can get to City Market Sauce.

Y'all gonna need-
one 8oz can of tomato paste - you can also use ketchup (makes it a skosh sweeter and tart-er) or puree fresh tomatoes (sorta fucks with the acid level and introduces a bit too much "hoity-toity" to the sauce).
1/4 cup yella mustard (french's or heinz - keep it low-brow, y'all).
1/4 cup brown sugar, keep an exta tbsp of it handy in case it's too tart.
3-4 tbsp Louisiana hot sauce (Cajun Chef is the benchmark for this recipe, Crystal and Frank's work as well).
1 tbsp white vinegar
2-3 tsp coarse black pepper (I lean to the 3 tsp side).

Directions:
Throw all that shit in a bowl and whisk the fuck outta it. After it is combined, let it set a spell and marry up, then put it on whatever you might put in yer mouth.

I tied up some super sweet clousers, but Kyle told[…]