All threads that bitch about new, existing, or old members will be posted/relocated here. Keep this shit off the General forum, because no one wants (or cares) to hear your opinions. Now go back to the other forums and post something worthy of reading.
Reply

By DayTripper -  Tue Jul 01, 2014 11:08 am
-  Tue Jul 01, 2014 11:08 am #573765
Getting skunked is just a part of fishing. I hate that, but have accepted that sometimes the fish, or the river, or the weather- or maybe all of the above- aren’t going to cooperate. For this reason, I would never make a promise to a client that they will catch fish. I’m a guide, not a god. That said, what I do tell people is that I will use my experience and work as hard as I can to put them in a situation, or situations, where they will have the opportunity to catch fish. I’ll try and help them improve their fly fishing skills, and at the end of the day, this is where the value in a guided fishing trip really lies. Its that whole, “Give a man a fish, and he eats for a day. Teach a man to fish and you feed him for a lifetime,” thing.

All that said, I want my clients to catch fish more than anything. There’s a certain buzz to teaching someone a technique and seeing them get it. And then there is the heroin of helping someone catch a fish- especially a large or challenging fish, or their first fish. It feels better catching them yourself. It’s seeing a concert live instead of watching it on YouTube- kind of an oxymoron when you think about it.

Last night, we had a pretty large storm system moving in. The weather man said it would hit us around 11pm, but the first lightning bolt struck around 10:20pm, just after the first few hex spinners came drifting down the river and we were set up on two quality fish- one just upstream of the stern, one just down from the bow. Based on the sound and appearance of their riseforms, I’d guess both were in the 18”-22” range.

One of the guys in the boat was a catholic priest, and I pondered whether or not that might justify going after these two pigs rising more and more frequently. No way god would strike down one of his guys, but I’m non-religious and checked the radar on my phone. A growing patch of red and orange was coming right at us, so I made the call to row them out, leaving two actively feeding fish behind. At the end of the day, I know it was the right call, getting struck by lightning would suck ass, but man did I want them to catch those fish.

God has a sense of humor, perhaps, as the second the boat hit the ramp at the takeout, a huge, ominous storm pretty much evaporated into thin air before I had the boat on the trailer. Not that I’ve been doing this for twenty years or anything, but that was the first time I had clients get out of the water without fish stink on their hands. Honestly, its eating me up. The silver lining is they’re in the boat again tonight and have another opportunity to put some fish in the boat.

This is Almighty - standing by, over.

your whole day rate is pulling your fucking trousers down, mate.
and you must make one hell of a kick ass streamside tea.

everybody gets one.
we'll always have buffalo, sweet josh.

austrotard wrote:who the fuck fishes at 10:20pm?
your whole day rate is pulling your fucking trousers down, mate.
and you must make one hell of a kick ass streamside tea.
http://en.wikipedia.org/wiki/Tea_%28meal%29
everybody gets one.

This time of year, it doesn't get dark up here till about 10:30. The hatches/spinnerfalls we're fishing don't go till after dark so most days, we don't even make our first cast till we can't see our hand in front of our face.

No tea , but I do serve beverages in old metal cups 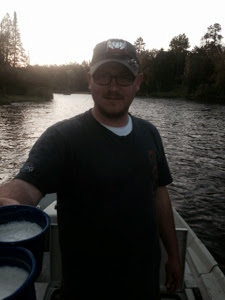 Blackened steelbow with mango relish, rice pilaf, Asparagus. Got the China and linens at a yard sale.

I can only hope in the face of fairness you get 45min of sunlight in the winter.
it's dark at 5:30pm here. western austria is gay.
we'll always have buffalo, sweet josh.

austrotard wrote:well that doesn't suck.
I can only hope in the face of fairness you get 45min of sunlight in the winter.
it's dark at 5:30pm here. western austria is gay.

Yeah, winter sucks. But, the five months in between are worth it.

Just came across my copy of the chronicles. Was th[…]

I don't know if this has ever been done before[…]