No Remorse or Principles (No, not Reuters)


No apology from IPCC chief Rajendra Pachauri for glacier fallacy

Aerial view of the Siachen Glacier 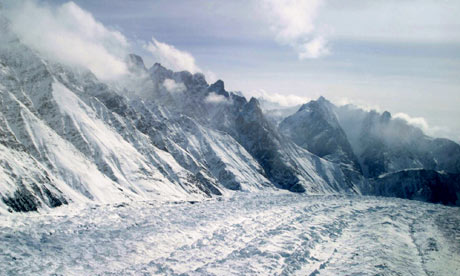 Pachauri said it would be hypocritical to apologise for the false claim that Himalayan glaciers (above) could melt away by 2035. Photograph: Channi Anand/AP

The embattled chief of the UN's climate change body has hit out at his critics and refused to resign or apologise for a ­damaging mistake in a landmark 2007 report on global warming.

In an exclusive interview with the Guardian, Dr Rajendra Pachauri, chair of the Intergovernmental Panel on Climate Change, said it would be hypocritical to apologise for the false claim that ­Himalayan glaciers could melt away by 2035, because he was not personally responsible for that part of the report. "You can't expect me to be personally responsible for every word in a 3,000 page report," he said.

The IPCC issued a statement that expressed regret for the mistake, but Pachauri said a personal apology would be a "populist" step.

"I don't do too many populist things, that's why I'm so unpopular with a certain section of society," he said.

In a robust defence of his position and of the science of climate change, Pachauri said:

• The mistake had seriously damaged the IPCC's credibility and boosted the efforts of climate sceptics.

• It was an isolated mistake, down to human error and "totally out of character" for the panel.

• It does not undermine the "basic truth" that human activity is causing temperatures to rise.

• That he would not resign and was ­subject to lies about his personal income and lifestyle.

Pachauri spoke as the second day of the Guardian's investigation into the emails stolen from the University of East Anglia reveals how climate scientists acted to keep research papers they did not like out of academic journals. One UEA scientist, Dr Keith Briffa, wrote to a colleague to ask him for help rejecting a paper from a journal which he edited. "Confidentially I now need a hard, and if required, extensive case for rejecting." The request apparently broke the convention that the review process should be independent and anonymous. Briffa was not able to comment because of an ongoing independent review into the stolen emails.

In another email, sent in March 2003, the leading US climate scientist Prof Michael Mann suggested ostracising a journal for publishing a paper that attacked his work.

"I think we have to stop considering Climate Research as a legitimate peer-reviewed journal. Perhaps we should encourage our colleagues … to no longer submit to, or cite papers in, this journal." Mann denies any attempt to "stifle legitimate sceptical views".

The emails also reveal that one of the most influential data sets in climate science – the "hockey stick" graph of temperature over the past 1,000 years – was controversial not just with sceptics but among climate scientists themselves. "I know there is pressure to present a nice tidy story [in the forthcoming IPCC report], but in reality the situation is not quite so simple," wrote Briffa in September 1999.

In his Guardian interview, Pachauri defended the IPCC's use of so-called "grey literature" – sources outside peer-reviewed academic journals, such as reports from campaign groups, companies and student theses. The false Himalayan glacier claim came from a report by the green group WWF. He said reports of further errors in the IPCC report linked to grey literature were ­spurious and the result of a "factory" of people "only there to create pinpricks and get attention".

Stories that claimed errors about losses from natural disasters and Amazon destruction were false, he said. "We looked into that [Amazon claim] and we're totally satisfied that what's been stated in the report is totally valid."

The IPCC is beginning work on its next climate report, and Pachauri said it would stress to authors and reviewers the importance of checking sources. "Our procedures are very clear on the use of grey literature. Whenever an author uses grey literature they need to double check the source of information is authentic and defensible. People have been using grey literature for quite some time now. Apparently in this [Himalayan glacier] case there has been a failure because authors did not follow the procedures required."

To exclude such reports, he said, would give an incomplete picture. "The reality is that in several parts of the world, which will be influenced by the impacts of climate change, it's an unfortunate fact that we just don't have peer-reviewed material available."

Pachauri also rebutted newspapers' claims that he lives a lavish lifestyle and wears $1,000 suits. He said: "It's ridiculous and it's a bunch of lies."

His salary from the research institute that employs him is fixed in the range of 190,000 rupees (£2,600) a month, he said, while he receives only travel expenses for chairing the IPCC.

The panel's report at the centre of the controversy said: "The likelihood of them [the Himalayan glaciers] disappearing by the year 2035 and perhaps sooner is very high," a statement referenced to a report by WWF, which had taken it from a magazine article. It was subsequently found to be wrong.

Questions were raised about the glacier claim in an article in the US journal Science in November, and again by the BBC on 5 December, leading to allegations that Pachauri had been told by Pallava Bagla, the Indian journalist who wrote both, that it was problematic, but failed to act.

But Pachauri said he had not become aware of the problem until January. "If he [Bagla] sent me an email and I didn't see it, I can only say that I'm sorry that I didn't see that email. A lot of my emails are handled by my office and I don't get to see them personally."

Pachauri also said he was taking steps to strengthen the staff employed by the panel. "We're in an information society today and we have to respond adequately and professionally. We've been weak in that regard to be honest. The IPCC is starting to realise we're living in a very different world to what we had in 1988.

"I think this [glacier] mistake has certainly cost us dear, there's no question about it," he said. "Everybody thought that what the IPCC brought out was the gold standard and nothing could go wrong. But look at the larger picture, don't get blinded by this one mistake.

"The larger picture is solid, it's convincing and it's extremely important. How can we lose sight of what climate change is going to do to this planet? What it's already doing to this planet?"

• This article was amended on 3 February 2010. In the original, a subheading included the phrase "Himalaya ice caps". This has been corrected.
My shit stinks like a 3rd world country, but dammit, if I'm in Hood River, I'm not drinking Ranier! The Wandering Blues

By Upsetter -  Wed Feb 03, 2010 2:34 pm
-  Wed Feb 03, 2010 2:34 pm #291992
Sounds like it was a strongly worded forecast that was either out and out incorrect or not based on the science it purported to be based on, the article is sketchy about what the exact problem was. From my perspective, I say, so what? Shit happens. Shouldnt have been in the report, but doesnt make any difference whatsoever. I find the basics of GW science very sound, irrefutable even, there is no doubt we "contribute" to it, significantly, by virtue of the gigatons of carbon we pump into the air every year. Beyond that, how the earth's climate system will react, its all forecasting, trying to predict chaos, and I listen to little of it. Regarding major policy shifts about energy sourcing, I think that needs to happen for a number of reasons, GWing being just one, and my opinion about that doesnt rely on dire forecasts about 2035 in the least.