Those probably catch more fish than the epoxy back, d-ribbed and perfect legged version a guy with a blog would tie.
Maybe we haven't drank enough Busch- Nolan

Best part of that is Gregory in the background in his Superman PJ's and some Legos (or some shit) mixed in with the fly ties stuff.
"girls with eating disorders will usually let you come in there in butt." -Jhnnythndr
"...my grandmother’s Tang always tasted like rusty water and dirty socks." - Average Joe
"with some limited exceptions steelhead live where the lady selection is sparce." - MTG

And I've been tossing purple turds.
"I never got a hoody."

Oh, and if every "asshole" is throwing cat turds, that means you are officially no longer part of that club. I respect your new found positive mental attitude, like the guy who I met up with a few years back who was a great friend in high school. He lifted his t shirt sleeve and had a tattoo of "PMA" in Rastafarian colors on his biceps. Without me having to ask, he told me what it stood for. I then realized why we had fallen out of touch.

This post was honestly meant to congratulate you on your new outlook, but it got derailed, because I am a dick. Sorry.

Edit: Now that I fish for stripahs on the Cape, does this mean that I can start using terms like "trout weenie"?


I miss the trout out there, truth be told.

While I'm at it, I must also say, there isn't anything quite like going to an East Coast barber shop in the city and getting lined up, and how much I missed it living out West the last 18 years. A haircut takes a good 45 minutes, and they straight razor you for 20 minutes of that, splashing that burning green aftershave on afterwards. Dudes walk in off the street just to say hi, and shots are poured for everyone, including the guy selling stolen shirts and Pumas(all sized 8, men's, like we are all 5'5" and 125 lbs). Fucking fabulous, and the haircut is the best money can buy, all for $18 before tip. I walk STRUT out of there feeling like a goddamned pimp, I might even wink at a girl on the way to my truck, if she deserves it.

There is everyone in there from drug dealers, junkies, politicians, businessmen, to off duty cops, not to mention idiots like me, all at the same time....like a water hole on the mighty Serengeti after a prolonged drought has broken.

Edit #3: Creamer, you tie some great flies, but the one above should be thrown in the bin and replaced with a fucking green over white Clouser, trout weenie. Better yet, all white, all yellow, or all black (for after sunset)....tied sparse and long 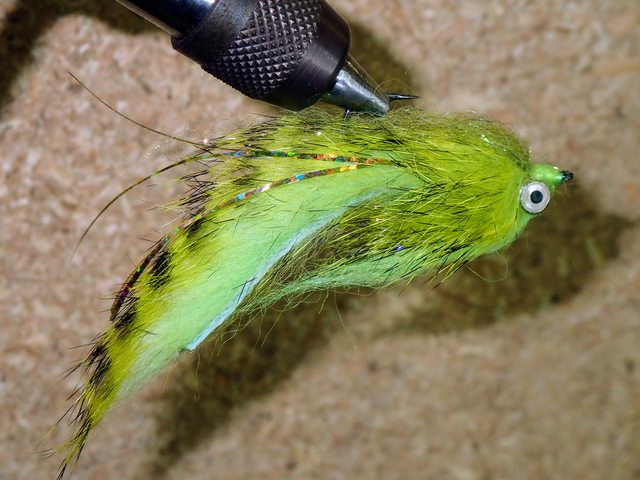 Truth be told, try craft fur on clousers in place of deer hair.

I bet you still wear a fly vest.
This is Almighty - standing by, over.

Took a break in there somewhere to throw this on the grill...

It was a fine evening indeed... Fishing with Raz in the AM, hopefully the redfish will oblige..

Took a break in there somewhere to throw this on the grill...

It was a fine evening indeed... Fishing with Raz in the AM, hopefully the redfish will oblige..

It's looking about 50/50 I'm going to find myself in Charleston in mid November with a day to kill. I dig these. What size are you typically tying your redfish flies?

Wish I could, but nay, I cannae. Hopefully next y[…]